Conventional wisdom suggests that a family’s assets will always jeopardize a student’s chances for financial aid. That is just plain wrong.

Mark Kantrowitz, one of the nation’s most respected financial aid experts, has estimated that only seven percent of families who file for financial aid see their aid eligibility decline because of their investment assets.

The reason why relatively few families need to worry about their net worth hurting aid chances is because of what the aid formulas disregard.

Important: While assets in qualified retirement accounts aren’t counted in the aid formula, distributions from retirement plans do count as income to the beneficiary. The one exception is when assets are rolled over from one retirement plan to another.

Here’s a quick example of what that means. If you have $50,000 saved up for college, the federal formula would reduce your eligibility for aid by $5.64 per $100 dollars of savings. With a $50,000 nest egg, financial aid eligibility would drop by just $2,820. And the parents in this example wouldn’t even get hit that much because of something called the Parents’ Education Savings and Asset Protection Allowance.

The federal financial aid formula automatically shelters some non-retirement assets of the parents, whether that be 529 accounts, taxable investment accounts, savings accounts, certificates of deposits, checking accounts or any other money that isn’t kept in qualified retirement accounts. 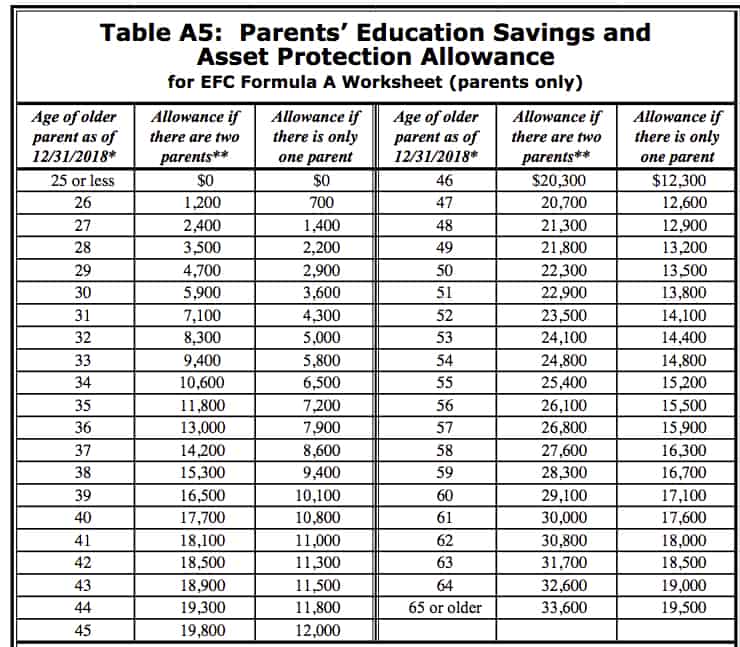 How much parents can shelter will depend on the age of the oldest parent. The calculation is based on the age of the parent  on the last day of the year. The older the parent, the more the household can shield. A family can protect considerably more if parents are married.

The chart above was pulled from the latest federal EFC Formula Guide, 2018-2019 (page 19). The amounts on this chart will change yearly.

Let’s say the oldest parent is 50. The family would be able to shield $22,300 in 529 savings plan money, as well as any other cash kept in non-retirement accounts such as savings, checking and brokerage accounts.

The amount a mom or dad could shelter in a one-parent household is less. A 50-year-old single parent, for instance, could shelter just $13,500.

The Asset Allowance Has Been Shrinking

In the majority of recent year, the EFC asset protection allowance has been declining. It can fluctuate up or down.

Making the formula even more flawed are built-in assumptions about inflation and rates of return that are wildly unrealistic and that make it appear that Americans don’t have to save as much for retirement.

You can learn more about the flawed nature of the asset protection allowance by reading this backgrounder:  Asset Protection Allowance Plummets, Cutting Financial Aid to Middle-Income Students.

The FAFSA formula allows students to shield all or a portion of their income.

For the 2018-2019 school year, a student can earn up to $6,570 for the year and not jeopardize aid.  The PROFILE does not provide an allowance, but rather it assumes that students will contribute something to their college education. Many PROFILE colleges require that students contribute in the $2,200 range (the EFC is hiked by this much) for their education regardless of whether they have a job or a savings account.

Money that teens have in nonretirement accounts is assessed at stiffer rates than parent assets. The PROFILE assesses student assets at 25% and the FAFSA assesses them at 20%. Unlike their parents, students do not have an asset protection allowance.

If a student has $2,000 in his checking account, schools would consider that $500 (PROFILE) and $400 (FAFSA) in that account would be available to pay for college. The student’s EFC that’s generated using the FAFSA methodology would be $400 (assuming he/she had no income beyond $6,420 that would boost the EFC further.)

Most students do not have to worry about their assets or income making much of an impact on their financial aid eligibility. Some exceptions are UGMA or UTMA and any other custodial accounts, which parents or grandparents might be using the save for college. These accounts will be assessed as student assets.

It can be a smart idea to move custodial money into custodial 529 plans because the money will then be treated by the FAFSA as parent assets at the much lower rate. Many PROFILE schools, however, will treat a custodial 529 account as the child’s asset. If this is an issue, contact a PROFILE college to determine how it treats custodial 529 accounts.

Trusts funds set up for the benefit of a child will also be considered a child asset even if the student doesn’t currently have access to the money.

Money that students have sitting inside a retirement account, such as a Roth IRA, does not count in aid calculations.

When Do You Calculate Your Assets?

While all financial aid formulas will want to know what the income for parents and the student via prior-prior tax returns, the financial aid applications only want you to share the value of you and your child’s assets on the day that you submit the FAFSA or PROFILE.

If the stock market has a bad day, this could be a good time for you to file your financial aid forms. It would also be better to file the applications after you have tapped your investment accounts to buy a car, pay a tuition bill, paid credit card bills or cover other expenses.