Lynn O’Shaughnessy (that’s me!) is a nationally recognized college expert, who is a higher-ed journalist, speaker and educator.

Lynn's focuses on educating high school counselors, college consultants and financial advisors, who need to understand how they can assist families with evaluating their choices and bringing their college costs down.

College is often the second biggest expense in a family’s life, but high school counselors and educational consultants usually don’t understand how to make college more affordable and neither do financial advisers. 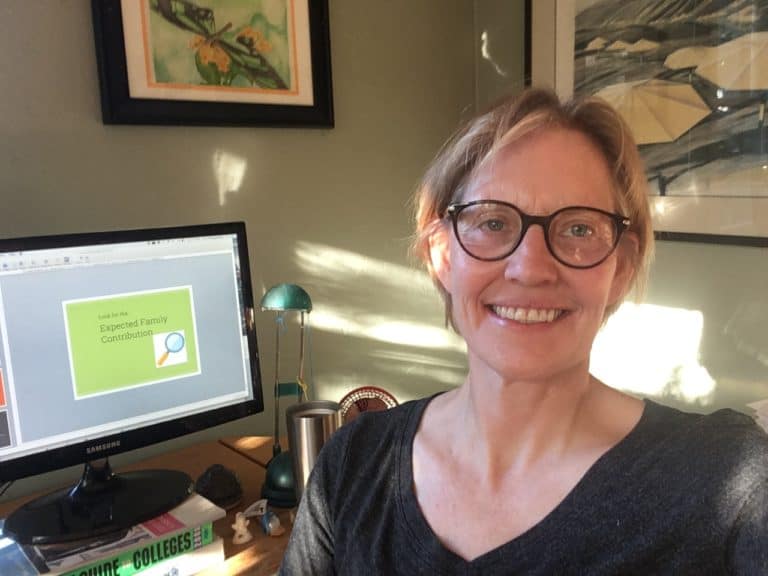 My chief goal is to help families with teenagers become smart college shoppers as they search for schools.

I  offer an online course  – The College Solution Cost Lab – for parents that provides a blueprint for how families can make college more affordable, as well as increase admission chances and find wonderful colleges and universities.  The courses includes written lessons, videos,  resource guides and webinars.

I have also had hundreds of college consultants and school counselors take my online course.

In addition, I created a college-planning program for financial professionals for Horsesmouth, a New York firm that helps financial advisors become better at their jobs.

I give popular presentations about college strategies for schools,  conferences, such as the Financial Planning Association annual conference and companies.

Prior to focusing on college issues, I was a veteran financial journalist who wrote for many consumer and financial industry publications such as  Forbes, Money and Bloomberg publications. I wrote three financial books, The Unofficial Guide to Investing (MacMillan), as well as Retirement Bible and Investing Bible (John Wiley & Sons). In addition, I ghost wrote two additional financial books, including one New York Times bestseller.

I am a proud native of St. Louis. I started college 1 1/2 blocks away from my house at the University of Missouri, St. Louis. Thanks to the encouragement from a professor at UMSL, I switched my major from history to journalism and transferred to the University of Missouri in Columbia, where I graduated from the nation’s oldest journalism school. One of my proudest professional moments was giving the commencement speech for the journalism school graduates at my alma mater.

A job offer from the Los Angeles Times eventually got me out to West Coast and I’ve lived the last 29 years in San Diego.

My son Ben graduated from Beloit College with a bachelor’s degree in mathematics and a minor in studio art in 2014. Ben graduated in June 2015 with his master’s degree in education from the Denver Teacher Residency program. He taught math at a high school in the Denver Public School system. He is now living and working at a Zen Buddhist community near Middlebury, VT.

My daughter Caitlin graduated from Juniata College in 2011 with a degree in Spanish and entrepreneurship and was formerly the marketing director of a toy company in San Diego. Now in the Silicon Valley, Caitlin launched a start-up, MaxableSpace.com, for homeowners who need help designing and building accessory dwelling units (granny flats) in California. Her company operates in San Diego, Los Angeles and the San Francisco Bay Area.

Want to save thousands on
college costs?

Learn about the College Cost Lab >>