Which College Should This NY Teenager Attend?

This is the month when high school seniors must decide where they will attend college.

It’s not surprising then that I’ve been getting emails from families agonizing about their choices. Here is one of those notes from a mom named Carmen:

I would appreciate your professional advice in the following matter:  My son has narrowed down his choice to two schools; SUNY Geneseo and SUNY Binghamton, (he was accepted into Binghamton’s School of Management). Both academically are good schools. Geneseo is a lovely school, great size & strong academic values but unfortunately does not have the recognition that Binghamton has.

Binghamton recently has had a little more recognition in the news sadly to say regarding their basketball scandal. I guess my question is, in your opinion does one school stand out academically over the other (my son will be a finance major) and should I be concerned about Binghamton’s scandal permanently damaging its academic mission?

Your expertise in this matter would be greatly appreciated.

Where Should This Teenager Go to College?

I don’t know which of these schools in New York state would be best for her son, but I will offer a few observations. I also would love to hear what you would advise this mom about her son’s choices.

Here are my thoughts:

1. I wouldn’t give a hoot about Binghamton disasterous experience with Division I basketball. I can’t imagine an employer not hiring a finance major because of the escapades of some basketball players.

2. I also wouldn’t get hung up on which school has the better reputation. Both are well regarded schools in the SUNY system. US News & World Reports’ college rankings are horribly flawed. Here is one of the posts that I’ve written about rankings

3. When evaluating schools, I’d recommend focusing on their missions not their reputations. Binghamton is a doctoral research university while Geneseo is a public liberal arts college. Binghamton has nearly 1,600 graduate students while Geneseo has just 56.

As a mom and a higher-ed journalist, I happen to believe that institutions that are not devoted to graduate education (colleges) are preferable for undergrads. The professors at colleges are more inclined to focus on the education of the undergrads. And, as a practical matter, when grad students attend a university, they are more likely to be the ones teaching the undergrads. In this setting, the professors get to devote most of their time to their own research.

I wrote a blog post last year that focuses on the different types of higher-ed institutions and their missions. I’d urge you to read it:

What is the Difference Between a College and a University?

4. No school is going to automatically boost a student’s chances at success in a career or in life. You have to work at it. A motivated student can 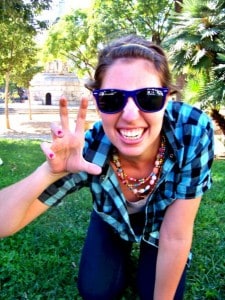 succeed anywhere. My own daughter illustrated this quite nicely:

5 Secrets to Getting a Job After College

A friend of mine recently asked for my opinion about how her son could decide between four schools — three on the West Coast and one in Texas – still left on his list. This week I’ll share the stepsthat I suggested they take to narrow down the list.

In the meantime, if you want to weigh in on where the New York teenager should attend school, please share your thoughts in the comment box below.

I just learned late last week that the second edition of The College Solution is going to be released nearly three weeks earlier than scheduled. The release date is now May 6. If you like my blog, you should love the book