In this lesson, I’m focusing on the Free Application for Federal Student Aid (FAFSA) because families, regardless of the type of school their children want to attend, must complete this application to qualify for need-based aid and to take out federal loans.

The FAFSA is the federal financial aid form that roughly 20 million financial aid applicants complete every year. Here is a breakdown of who requires the FAFSA:

The federal government relies on the FAFSA to determine who qualifies for federal financial aid.

The Pell Grant represents the major source of federal aid grants. It’s rare for a family with an adjusted gross income of $50,00 or higher to qualify for a Pell Grant.

Even if eligibility for a Pell Grant or much smaller federal programs such as the TEACH Grant or the FSEOG Grant, is out of the question, parents will want to file the FAFSA if they wish to be eligible to borrow through the federal Direct Subsidized and Unsubsidized Loans and the PLUS Loan for parents.

The FAFSA is also required if a child hopes to obtain a campus work-study job.

Contact a school to be sure if you otherwise wouldn’t be planning to file the FAFSA, but your child is hoping to receive a merit scholarship.

You will access the application at FAFSA on the Web.

A parent and the student must obtain a so-called FSA ID, which is a username and password combination. The FSA ID serves as a student’s or parent’s identifier to allow access to personal information on the financial aid website and acts as a digital signature on some online forms.

One of the most unpleasant aspects of filing for financial aid had been how rushed the process has always been.

The FAFSA had traditionally been released on January 1 each year, which has never given parents much time to file for financial aid. This is especially true since families need their tax returns finished before finalizing the FAFSA.

The aid deadlines for some state programs are in February and many schools expect families to file for aid in that same time period.

The admission cycle and the annual tax-filing calendar have never been aligned. And that has also forced students to apply to schools months before knowing if these institutions would be financially feasible.

It’s been a terrible system, but the system changed starting for the 2017-2018 school year. This was great news for most families.

Here are some key things that you need to know about the changes:

Parents of students who will be in college in the fall of 2018, for example, will use their 2016 federal tax return to complete the financial aid forms. Under the old system, these parents would have relied on their 2017 tax returns. So you can see that scrambling to complete their tax returns is no longer a problem because of the reliance on an older tax return.

A reason for a professional judgment.

If parents’ financial situation has changed for the worst since they filed their two-year-old tax return, they can ask for a professional judgment from a school. College financial aid administrators have the power to adjust a student’s aid amount based on information that isn’t reflected in the aid application.

When To File the FAFSA

The federal government has traditionally released the latest FAFSA on January 1 each year, but with the changes, the FAFSA is now available on October 1 each year. So, for instance, parents can start filing the FAFSA beginning Oct. 1, 2017 for students who will be attending college in the fall of 2018.

The PROFILE was always available beginning on October 1, but in the past families had to use estimated taxes. Using estimated figures isn’t necessary any more since the PROFILE is using two-year tax returns too.

Be aware of state deadlines.

It’s best to complete the financial aid applications as soon as possible because colleges have financial-aid deadlines and so do states. Some states, such as Illinois, Kentucky, North Carolina, Vermont and Washington, dispense money to eligible students on a first-come, first-serve basis until the money runs out. States rely on the FAFSA to determine aid eligibility.

You can find out what the deadlines are for many states by looking on the front page of the federal government’s FAFSA on the Web Worksheet 2017-2018.  The worksheet contains some of the FAFSA questions so it’s smart to check it out before tackling the real application.

Here is a snapshot of the worksheet’s front page that always contains the state deadlines on the front page: 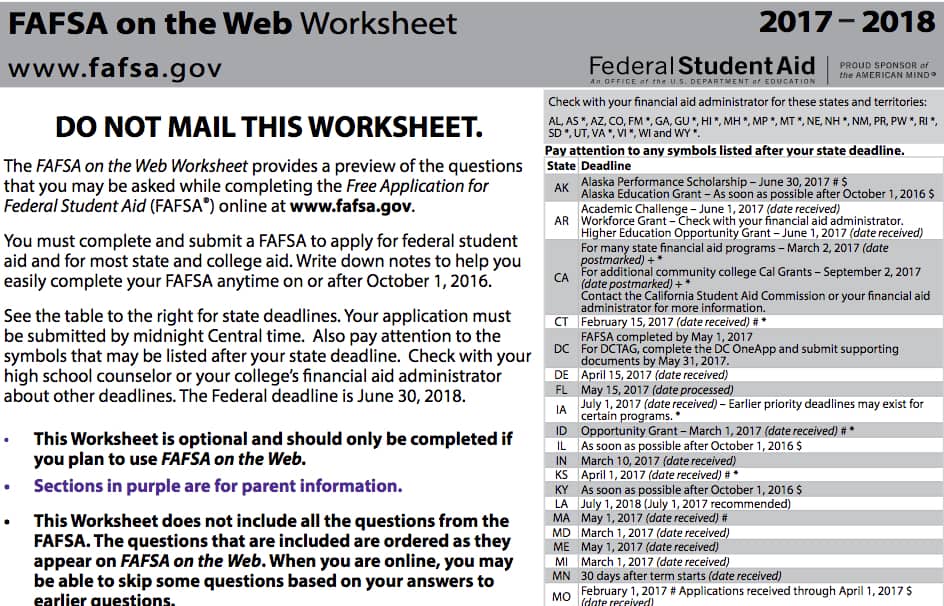 School Order No Longer an Issue

When completing the FAFSA, families used to have to be careful how they listed the colleges that their child would be applying to because colleges could use that information against them.

Some schools — no one knows how many – used to check the FAFSA to see in what order an applicant listed his or her schools. A family can designate up to 10 schools at one time on the FAFSA. The U.S. Department of Education has traditionally shared the FAFSA information with all the designated schools on an applicant’s list, as well as applicable state agencies that award aid.

The federal government never intended for this information to be used as a tip sheet for colleges. The practice burst out into the open when a trade publication wrote this story about it:  Using FAFSA Against Students. The story suggested that schools could be denying admission and reducing aid to students based on the order of colleges listed on the FAFSA.

The story caused an uproar, but I’m happy to say that in the summer of 2015 the federal government announced that it would no longer be sharing this information with other schools.

Although schools will no longer gain access to a student’s school list via the FAFSA, state higher-ed agencies will continue to have access to students’ college preferences. Several states, including Massachusetts, New Jersey and Connecticut, require that students put a state university first on the FAFSA list to be eligible for some state grants.