This course is focused on how to make college more affordable, but you can’t talk about escalating prices without exploring one of the chief culprits — U.S. News & World Report’s 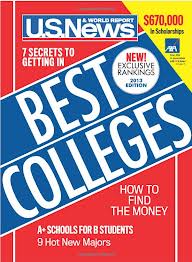 For all its power, U.S. News is actually a shell of its former self. It’s not even a magazine anymore. It now rates all sorts of stuff for its survival including hospitals, cars, diets, vacations, and health insurers.

Despite its diminished publishing status, U.S. News imposes tremendous influence on which individuals schools award money to and who comes up short. And, most importantly, it has been hugely influential on the continuing escalation of college prices for students of all incomes.

Perhaps aggressive pursuit of higher college rankings wouldn’t be a bad thing if the rankings actually measured what sort of job a college or university was doing to educate its undergrads.

One of the perverse aspects about the rankings is that turning out thoughtful, articulate young men and women, who can write cogently and think critically won’t nudge a school’s ranking up even one spot. Curiously enough, U.S. News doesn’t attempt to measure the type of learning going on at schools.

Unfortunately, the methodology fueling the rankings is a collection of subjective measurements that students and families are supposed to rely upon to pinpoint the schools doing the best job of educating undergraduates. U.S. News relies on proxies for educational quality, but these proxies are dubious at best.

As you contemplate paying for college, here are three ways that rankings ultimately hurt some students and favor others:

Many teenagers end up as collateral damage in the rankings race because schools that are more selective are rated higher, which encourages them to accept more wealthy students. US News awards schools, which accepts more students with higher test scores and grade point averages from their freshmen.

This focus on selectivity has been a boon for affluent high school students, who tend to enjoy better academic profiles. These teens can afford expensive test-prep courses (standardized tests are highly correlated with income) and are more likely to have attended schools with stronger academic offerings.

Before the rankings became so prominent, high-income students typically had to pay full price for college. The majority of grants were reserved for middle-class and low-income students who required financial help. But with the rankings premium linked to top students, private and public institutions began offering merit scholarships to entice smart, wealthy students to their campuses rather than to their competitors.

How do you cough up the money for these deal sweeteners? One way is to raise the tuition price to generate extra revenue for merit scholarships and another way is to reduce the financial aid to needy students.

You can learn more about how rankings have boosted college costs for low and middle-income students by reading three landmark reports issued by the New America Foundation that focus on how colleges have been competing for wealthy students and leaving the low-income students behind. You can find the links to all three reports in the lesson entitled, College Diversity Opportunities i.

The only schools that don’t offer merit scholarships to high-income students are the institutions that don’t have to. Wealthy parents whose children get into an elite school like Harvard or Notre Dame will be happy to write checks that will sometime exceed $300,000!

The most elite schools boast that they reserve their aid to the families who need financial help to attend college, but most of these institutions offer admissions to a low percentage of needy students.

Check out this old post that I wrote for my college blog at CBS MoneyWatch: The Nation’s 15 Richest and Stingiest Colleges.

U.S. News rewards brownie points for schools that direct money into making their campuses look beautiful. The ranking giant loves it when schools build swank student unions, LEED-certified academic buildings and athletic shrines to the jocks and their fans. U.S. News also reward schools for paying professors more even though there is no correlation between how much professors are paid and whether they are good teachers.

Malcolm Gladwell wrote a fascinating article for The New Yorker  on college rankings back in 2011 in which he discussed the incentive of institutions to turn their campuses into lavish palaces and stick the bill with families:

I’d also urge you to read an eye-opening account of how one institution – George Washington University – spent with abandon in an effort to boost its reputation (it used to be a commuter school for blue-collar students) and win the rankings game at the detriment of its students. The Prestige Racket, which ran in the Washington Monthly, highlighted the kind of dubious enrollment management practices that countless other higher-ed institutions have embraced.

Boston Magazine published an article about the successful efforts of Northeastern University to rise in college rankings in this eye-opening article: How To Game the College Rankings.

While U.S. News rewards institutions that spend money, it doesn’t penalize schools for charging too much and pushing students into greater debt than necessary. In fact, U.S. News doesn’t even inquire – or care – about the average student debt of a school’s graduates. It’s a terrible omission. No wonder that schools have been less likely to put the brakes on spending when it won’t improve its ranking.

Why does U.S. News salute spending sprees and not institutional frugality? The magazine made that decision in the 1980s when the rankings were unveiled. When asked, the head of the ranking’s methodology has provided no real answer to why cost and debt isn’t included in the formula.

What else you need to know about the college rankings

Even though they don’t directly impact costs, here are some other realities that you should know about U.S. News’ college rankings:

The biggest rankings factor boils down to what everybody else thinks about each other. Three administrators from the offices of the president, provost and admissions at each of the institutions in the national university category, for instance, must assess what they think about all their peers on a one-to-five grading scale. What do administrators at Dartmouth and Notre Dame and Oregon State, however, know about what’s going on at Brandeis, Baylor and the University of South Florida?

Because it’s a beauty contest, the oldest, best-known schools like Princeton, Harvard, Yale, as well as liberal arts colleges such Williams, Amherst and Swarthmore will always command the top spots, because they will always automatically ace the reputational hurdle.

US News’ algorithm also favors schools that spurn more students. To increase their rejection rates, some schools will court students through marketing materials and social media that they have no intention of accepting. So beware when your child gets promotional material from schools that suggest they really, really want him or her.

Here’s another trick: some institutions have made it easy for students to apply via priority or VIP online applications, which are referred to in the industry as “fast apps.” Schools use this strategy to increase the size of their student body, as well as bump up their rejection rates which U.S. News rewards.

Students today want to know what colleges and universities will provide them with a pathway to good-paying jobs. The rankings, however, don’t reward schools that graduate students who find solid employment. In fact, U.S. News doesn’t even ask about employment success.

U.S. News fixates on how selective a school is. It focuses on the academic caliber of a school’s freshmen, not on what happens once students arrive at their schools. That’s like judging a hospital by how sick the patients are when they arrive. Are schools doing an excellent job of educating their charges or do they fail? U.S. News doesn’t know and doesn’t attempt to find out.

1. U.S. News college rankings use a flawed methodology to determine which colleges and universities are the best.

2. Over the years, the rankings are one of the major culprits in the rise in college prices well beyond inflation rates.

3. You should not believe that a college ranked No. 1 or 18th or 81st is superior to one that is ranked 7th or 30th or 99th. The best way to use the rankings is to generate ideas. This will be particularly helpful in searching for promising schools beyond the national university category, which includes nearly all of the nation’s best known universities.