I’ve been devoting this week’s posts to college accountability.

Are colleges and universities doing what we are paying them to do:  educating our children and preparing them for the working world? In most cases we don’t know.  If you missed my two previous posts, here they are:

Sharing a College’s Return on Investment

In my last post, I mentioned the database that St. Olaf College created that allows families to see how many grads found jobs or went on to graduate school and where they landed.

Unfortunately, what St. Olaf is doing is extremely rare and if we depend on schools to self report job outcomes we can probably forget about meaningful disclosure.

If you’ve ever asked a university admission office  how many alums get into grad school or have found a job, you will probably receive an answer. But these stats depend on grads filling out surveys and returning them. If your efforts to get into medical school was a bust and you’re unemployed and living back home, would you return your alma mater’s survey?

I found out something fascinating about these self-reported employment/grad school surveys while I’ve been attending the annual conference of the Higher Education Consultants Association (HECA) in New Jersey this week. (I was the speaker at a couple of sessions.) At the conference, an admission director at SUNY Binghamton told me that nationally the return rate on these surveys is about 5%.

There is another way, however, to measure whether a school is doing a good job of preparing students academically for the real world. States can get involved.

The state of Virginia is ready to deliver it. Virginia has developed a database that will provide median salary information for graduates at colleges and universities throughout the state. The database will also contain information on median salaries of students in different majors.

Using the database, for instance, you could compare the median salary of a political science major at George Mason University with a poly sci grad from the University of Virginia.

There will be some limitations to the database. Graduates of Virginia schools will only be tracked if they work in Virginia and the self employed are excluded. Still this tool will be valuable for families evaluating Virginia schools. All public universities will be in the database, but only some private institutions.

The Chronicle of Higher Education published an article earlier this year about the Virginia database. The article said the database was to be rolled out this spring, but I couldn’t find it yet. I’m assuming it isn’t ready yet, but if it is up and running, I will supply the link later.

As the article explains, there is no reason why other states can’t do the same thing: 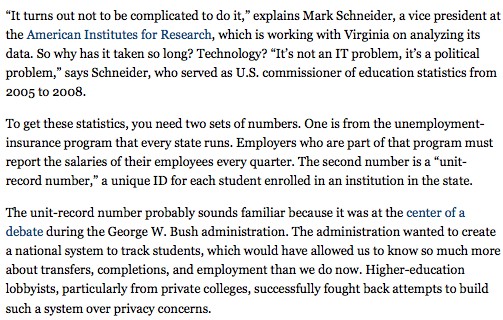 You can read the entire Chronicle article here: Taking Some Guesswork Out of the Value-of-College Question

All states should be following Virginia’s lead. The sooner we have hard data about how schools are preparing students for life after college, the more irrelevant those dubious college rankings will be.