Thinking Outside the College Box 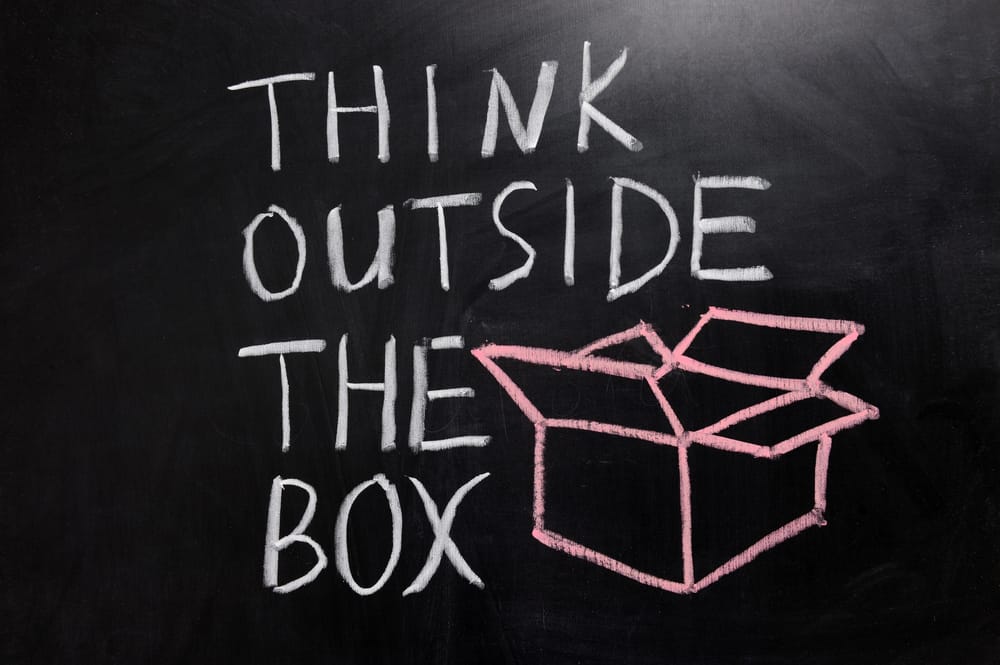 Students typically end up looking at a fairly narrow lineup of schools, which is not always a smart strategy if you want to find good academic fits, as well as colleges that will be more affordable.

Today I want to share the following three helpful resources that can provide you with ideas that can help you think outside the college box:

I am grouping these resources together because they can help you generate ideas by relying heavily on graduation rates. It’s shocking to me, by the way, how many parents assume their children will graduate in four years when the odds are against this happening.

According to federal statistics, just 33.3% of full-time students attending four-year public colleges and universities graduate in four years while only 52.8% of students at private institutions manage to do this.

DIY College Rankings is the creation of Michelle Kretzschmar, a former data analyst, who helps families use statistics to find the best schools for families.

In addition to her college blog, she has created college spreadsheets that can help you in the hunt for schools. She specializes in generating lists of colleges and universities that have at least a 50% graduation rate and a 50% acceptance rate. On her site, you’ll also find resources on college athletic recruiting.

Here are some of her lists:
50-50 Highlights: 41 Best Financial Bets for Public Universities

50-50 Highlights: Colleges With the Highest Institutional Aid as a Percentage of Tuition

With help from the Gates Foundation, The Chronicle of Higher Education created the College Completion microsite within the trade publication’s website that you should visit.

On College Completion, you can check grad rates of individual schools, but you can also use the search tools to find promising prospects that you didn’t even know existed. For instance,  you can create custom peer groups to compare colleges and sort individual private and/or public schools by state and graduation rates.

To give you an idea of what you’ll find, here is a screenshot of a partial list of the 57 private colleges and universities in Ohio that I generated by sorting for the highest four-year grad rates. I don’t know any parents who want their children to take six years to purpose a bachelor’s degree! 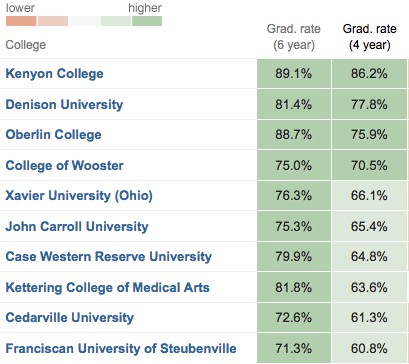 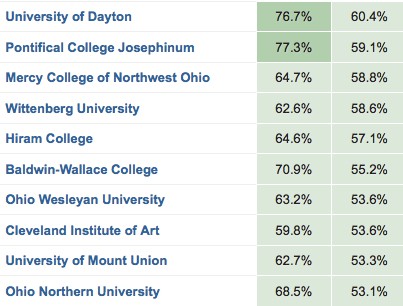 I bet you haven’t heard of most, if not all, of the Ohio schools on this list.  I’m sure that similar lists for institutions in other states would also draw blanks. Yet there are schools on this list and others like it that are absolutely worth exploring!

You can also use College Completion to alert you to schools with shockingly low grad rates. Here is a screenshot, for instance, of some public universities in California, which reveals poor four-year grad rates, as well as other statistics about the schools including how much money each university spends per student. 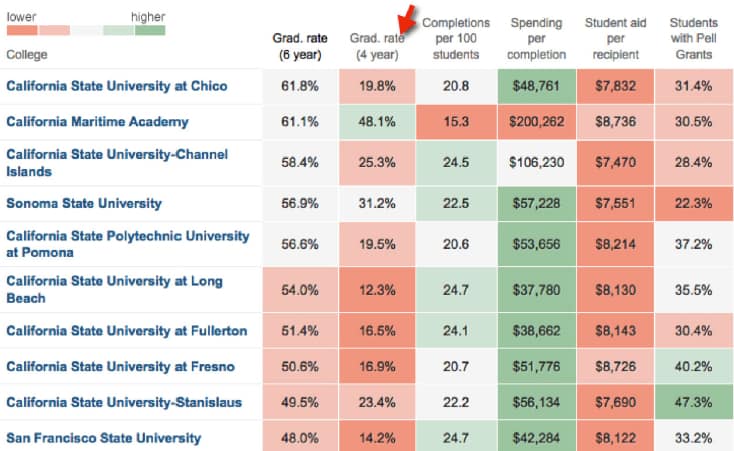 You can watch this introductory video to learn more about how to use the valuable tools on College Completion.

College Results Online, a creation of The Education Trust, provides similar information to what you’ll find on College Completion.

One of the site’s unique features that I especially like is the ability to find schools that are similar to each other. To create a list, you must first call up the profile of a school and then click the Similar School button.

As an example, I am using Butler University in Indianapolis, which which is priced $10,000 to $13,000 cheaper per year than two other private universities (Northeastern and Drexel) that also have popular coop programs.

When I clicked Butler’s Similar Colleges link, the site generated a list of peer institutions based on 12 institutional and student characteristics (highlighted in yellow.) You can sort based on any of these factors. I’d also highly recommend that you adjust the grad time frame from six years down to four years, which I always do.

Here is the partial list of schools similar to Butler U. generated using the Retention and Progression Rates option. This option not only generates the four-year grad rate for each school, but also the freshmen retention rate, which is hugely important. The retention rate indicates how many freshmen return for a second year. (One reason why Butler has a lower four-year grad rate is because of its coop program.) 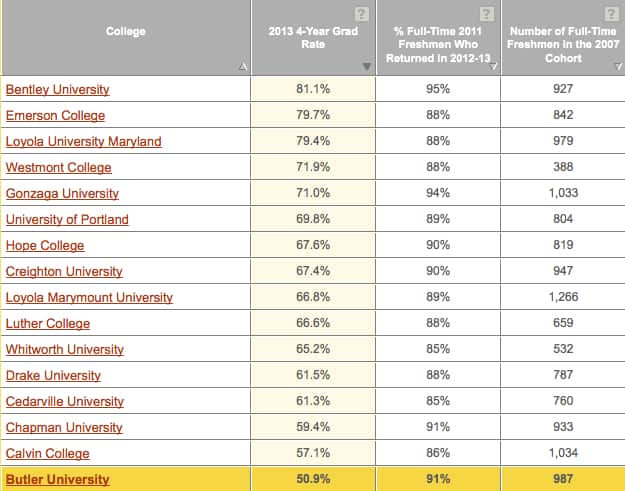