The Shocking Truth About Graduation Rates

I met a teenage girl during the fall who was excited about applying to Hampshire College.

She had visited the campus in Amherst, MA, had met professors and talked with students. She was smitten. She and her mother felt good that they had done their due diligence on the college, but then I asked them a question that drew a blank stare: Do you know what Hampshire’s four-year graduation rate is?

They didn’t know what it was and that’s strangely common. Every year students apply to schools without ever knowing if they have a good shot of graduating in four years. Most college students, by the way, don’t graduate in what used to be the traditional eight semesters.

When I give talks out here in California and share a Power Point slide with four-year grad rates of some of the state universities, it always triggers a collective gasp from the audience. Really!

Now you might assume that students who attend a liberal arts college that costs $54,000 are going to graduate on time, but that’s a dangerous assumption. I happened to know that Hampshire’s graduation rate is strangely low for an expensive, selective school. The school’s four-year grad rate is 54.8%. 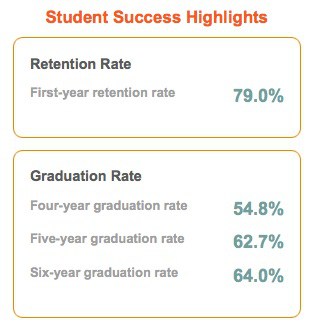 One of the features that I particularly like about College Results Online is that the site will generate the names of peer institutions for you so you’ll get  a sense about whether a school’s grad rate is good or not for the company it keeps. Feeling good about Hampshire’s grad rate compared to San Jose State won’t cut it because they are entirely different institutions.

The cool part about the site’s software is that you don’t have to know what a school’s comparable institutions are. Simply hit the Similar Colleges button. When I did that in Hampshire’s case, the software generated this list of peer institutions with their four-year grad rates.

You can see that Hampshire lands at the very bottom. While Hampshire’s 54.8% four-year grad rates is alarming, it looks even worse when compared to some of its peers. 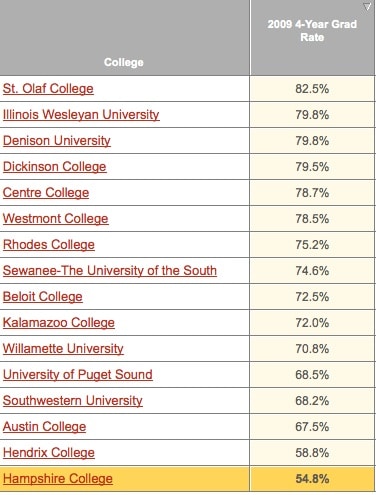 How Grad Rates Are Calculated

You should know that grad rates are a bit misleading for all schools simply because of the way that the federal government collects them. These figures only reflect the graduation rates of students who began as full-time freshmen and graduated four years later. Strangely, the federal government never tracks what happens to part-time students.

Equally odd, full-time students who end up transferring to a different college are counted as non-graduates of their original college. So obviously schools where many students leave will have lower grad rates than others. That’s clearly an issue at Hampshire, which leads to another disquieting statistic. Hampshire’s  freshmen retention is low for a highly selective private school. The freshman retention rate is only 79%. What’s with that?

When you are paying top dollar for a private college, the fact that 21% of students leave after freshman year is something to worry about.

Now let’s look at a state university. I picked the University of Texas at Austin simply because Texas is the third biggest draw for my blog after California and New York state. In general, state flagship universities have higher grad rates than the vast majority of other public universities. 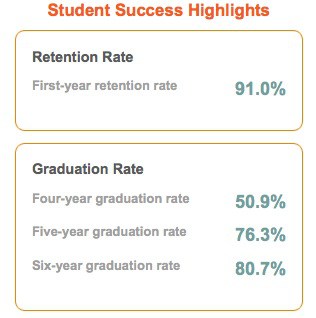 A student’s chance of graduating on time at the University of Texas, which draws a far more diverse student body, is about as good as getting “tails” on a single coin toss.  (Twenty three percent  of students at UT are low income versus 12% at Hampshire.) Most Texas students require five years to graduate.  When I see a grad rate like this, I’d want to know who is graduating in four years to assess my own child’s chances of being in that group. Far more students return for a second year at Texas.

Now let’s look at some of the Texas flagship’s peers: 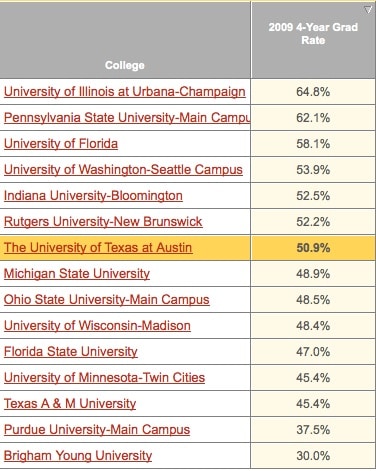 There are some flagship peers that clearly possess better grad rates than UT, but in looking at many grad rates for flagships  over the years, I’d say that’s a pretty typical one.

When evaluating schools, always look at graduation rates. Even among schools of similar reputations, the grad rates can be dramatically different. Also find out what it would take at any particular school to graduate on time! Do so could ultimately save you tens of thousands of dollars.