The Realities of College Money

For many students the biggest source of money will be from the colleges themselves.

That’s why it’s important for you to understand what would motivate any school to give your child one of its awards.

Schools don’t dispense grants and scholarships to be nice. They give awards because they expect to get something valuable from a student in return.

To understand why schools are eager to award aid to some students and not others, you have to appreciate that schools are businesses. They are focused on increasing their own reputations and achieving their institutional goals.

Private and public colleges and universities routinely employ in-house enrollment managers or hire consultants who devise ways for colleges to use their institutional cash as strategically as possible to assemble their freshman classes. Typically this means helping institutions leverage their own revenue to attract the kind of teenagers they covet.

Enrollment management practices have turned financial aid from primarily a utilitarian way to help disadvantaged students into a powerful tool to attract higher achieving students, as well as the wealthy.

The most eye-opening article that I’ve ever read on enrollment management is more than a decade old, but it’s as relevant today as when I read this Atlantic Monthly article – The Best Class Money Can Buy.

The Realities of Preferential Packaging

If you’ve browsed through marketing materials from colleges you probably haven’t gotten the sense that financial aid is heavily determined by a college’s excitement or lack of enthusiasm for an applicant. Financial aid realities are a topic that admission officers rarely broach with families. In fact, I’d argue that most of the admission representatives that families typically encounter at college fairs honestly don’t know how the money is divvied up.

Most admission reps possess little-to-no knowledge of the tough decisions that are being made back at their motherships by the senior administrators, who must juggle the realities of finite resources and competing institutional goals.

Many of the admission reps, who are not in the loop, are recent young college grads themselves who are eager to share with families why their

institutions are so great. When families ask these admission cheerleaders how they can afford their institutions, they will often respond by saying something along these lines:  “We’ve got scholarships that start at $5,000 and go all the way up to full-rides!”

The reps might also mention that many or even most of the institution’s students receive scholarships. Reps urge teens to apply to see what kind of goodies they will ultimately win. It’s no surprise then that students and their parents get excited as they contemplate the awards coming their way.

The reality, however, can be very different from the upbeat picture that reps serve up of a can’t-lose lottery. For starters, a $5,000 annual scholarship isn’t going to go far if the school costs $50,000. And while a full-ride sounds awesome, just how many get this top award? One or two applicants or maybe a dozen in a freshman class of 1,000 or 2,000 students?

Families also shouldn’t be swayed if a rep notes that most students at his or her institution receive grants and scholarships. At private colleges and universities 88% of students receive a tuition discount via institutional grants/scholarships and the average discount slashes 55.5% off the tuition price.

These latest statistics  come from the National Association of College and University Business Officers, which is considered the definitive source for tuition discounting. You can see the discounting trend in the graph below.

Giving awards is the cost of doing business in the higher-ed world because, contrary to media reports, the college market is largely a buyer’s market. With the exception of the elite rankings giants, enrollment administrators at most schools worry each year that they aren’t going to fill all their freshmen slots. In fact, the latest Gallup survey that polls administrators at public and private schools, on behalf of Inside Higher Ed, revealed that 61% of schools did not meet their freshman targets for the 2015-2016 school year.

Here is a snapshot from the Inside Higher Ed survey that illustrates just how concerned public and private colleges and universities are: 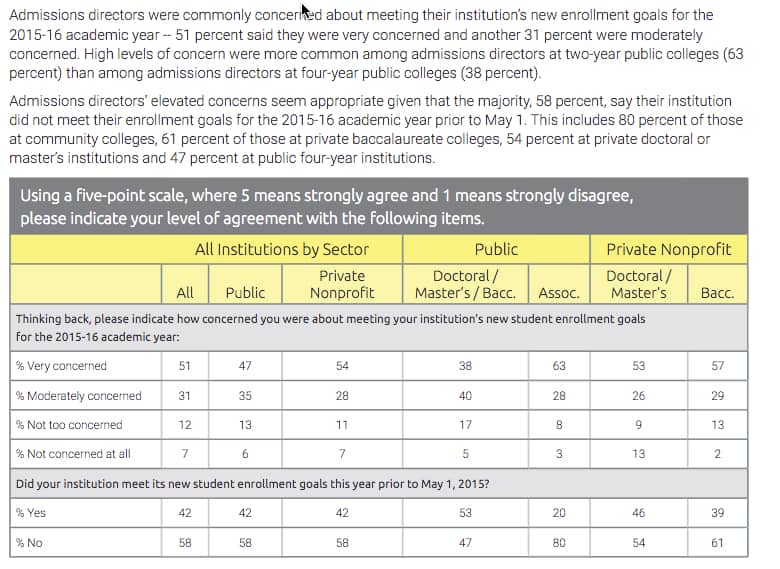 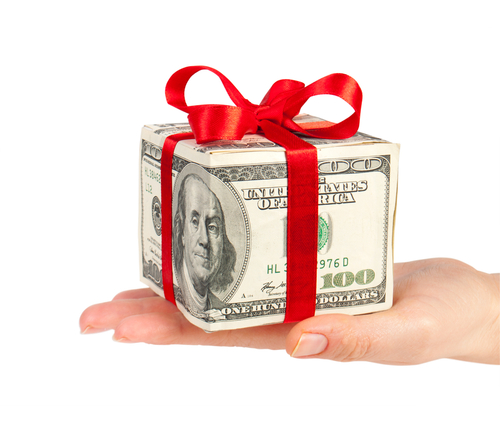 The danger that vague promises of awards pose is that this information isn’t going to help you determine if a particular school will be generous to your family or your clients. If money is an issue, and it usually is, you don’t want your child to settle for a school dispensing $5,000 scholarships like peanuts, if there are colleges that would be eager to chip in serious money.

Unfortunately, you can’t depend on schools to reveal their secret sauce and how it dictates what applicants get awards and in what amounts.  When you know what motivates schools, you will be more likely to cut your college costs.

You can start by understanding this harsh reality: colleges and universities will almost always reserve their so-called preferential financial aid packages to the students they really want.

On its website, Muhlenberg College, a highly regarded liberal arts college in Allentown, PA, shares an unusually candid explanation for preferential packaging – The Real Deal on Financial Aid – that I urge you to read.

The essay’s main take-away is that students who are in the top quarter to third of a school’s freshman class will typically enjoy better financial aid or merit scholarships. What kind of academic profile a student will need to get into the top third will vary by school. At some schools, a 3.25 GPA will launch a child in that coveted territory and at other schools it could be a 3.75 GPA or higher.

The Muhlenberg essay notes that students in the bottom half of the applicant pile are more likely to receive smaller packages including those stuffed simply with loans and a possible work-study job. These teenagers are the ones most likely to be gapped. That’s when the university produces a financial aid package that doesn’t include enough money to cover the student’s demonstrated need.

Sometimes the financial aid gap can be quite large. A $40,000 school, for example, might give a student with an Expected Family Contribution of $4,000 a financial aid package that includes a $10,000 grant with the rest in loans. In a case like this, the gap is so large it’s scary.

In fact, one way to shrink the cost of college is for students to generally avoid what high school counselors like to refer to as reach schools. It’s common for counselors to recommend that students apply to safety, target, and reach schools. If money is a concern, it’s best to look for schools that represent a solid academic match for the student and skip the reaches.

Schools are less likely to provide decent packages to less-than-stellar students because these teenagers won’t help their bid to inch up in U.S. News’ and World Report’s college rankings. Pursuing a better ranking from U.S. News is an obsession at many public and private institutions. You will learn more about how college rankings impact financial aid and merit award practices in the next lesson.