What schools produce the most undergraduates who end up heading off to graduate school?

The subject came up yesterday because a friend of mine was telling me about a brilliant teenager who wants to eventually get a PhD in physics. The student lives in California, but the mom wants him to apply to schools in the Midwest where she grew up.

I asked my friend if the teenager had checked out Lawrence University.

I realize that might be your reaction, but here’s the thing – many of the schools that are feeder institutions for the nation’s PhD programs are liberal arts colleges. While most liberal arts colleges are not well-known among families with teenagers, these institutions — and their reputations — are very well known to graduate schools. Lawrence University, a liberal arts college Appleton, WI, for instance, happens to be 10th on the list among all four-year colleges and universities that produce, per capita, the most physics PhDs. (See chart below.)

I bet most families assume that attending a public flagship university or a nationally-known private research university is the best ticket to graduate school. If you look at the following lists of the most successful PhD feeder schools for different majors, you will see a somewhat different story. Not a single public university makes any of the lists. The entire Cal State system, however, is considered the No. 1 producer of humanities PhD’s.

I thought you’d be interested in the list of undergraduate institutions that, per capita, produce the most PhD’s. I pulled the names off the website of  Reed College, a liberal arts college in Portland, OR, that is understandably proud of its impressive record of turning out undergrads who end up earning PhD’s. The statistics cover the years 1997 to 2006 and come from the National Science Foundation and the federal government’s education database.

On the list of schools that have the most undergrads who ultimately earn a PhD  in all disciplines, Reed comes in No. 3 behind Cal Tech and Harvey Mudd College.

As you’ll see in the first column below, seven of the 10 schools, whose graduates earn the most PhD’s by the percentage of students are liberal arts colleges. 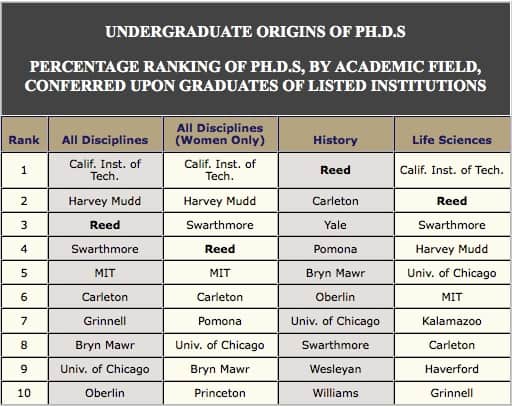 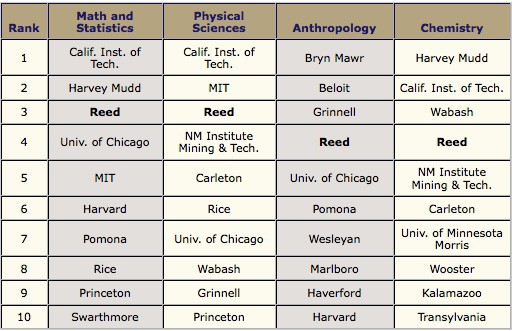 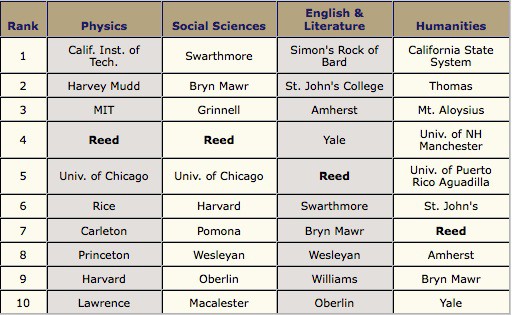 Students can increase their odds of being accepted to graduate school if they earn their bachelor’s degree at a liberal arts college. On a per capita basis, for instance, liberal arts colleges produce twice as many students who earn a PhD in science than other institutions. That makes sense since students have more opportunities to work closely with their professors, they can actually learn more due to small classes and receive glowing recommendations from their teachers, many of which, graduated from prestigious graduate programs.

What’s even more remarkable about the prominence of liberal arts colleges on the science lists is this: many students major in other disciplines at liberal colleges while students who attend schools like Cal Tech and MIT overwhelmingly expect to pursue careers in the sciences and engineering.

I’ve attached a lengthy essay by Thomas R. Cech, a Grinnell College grad, Nobel Laureate and chemistry professor at the University of Colorado, who wrote a fascinating essay contrasting the science experience for undergrads at colleges versus universities. Cech believes science majors at liberal arts colleges enjoy an advantage over undergrads who attend universities. Here are Cech’s thoughts:  Science at Liberal Arts Colleges: A Better Education?

The No. 1 way to cut the cost of college is to become an educated consumer. You can learn how by attending my popular online course, The College Cost Lab. I’ll be relaunching the course in June and if you’d like to be notified when I have more details, please click here!