Most students, who attend four-year institutions, end up at state colleges and universities so it’s important to understand how you can reduce the costs at these schools.

Here is an overview of what you need to know:

1. Understand what your state programs offer.

If you haven’t already read it, please check out the lesson (State College Aid) that is in the Sources of College Money module. In some states, the financial assistance (merit or need-based) comes from the state and in other cases, the state universities are in control of the money spigot.

Since every state is different and can offer a variety of grant and scholarship programs, it is important that you find out what the opportunities are in your state. An easy way to find these individual state programs is to head to the website of the National Association of Student Financial Aid Administrators. Once you’re on the site, you’ll see a map (screenshot below) and you’ll just need to click on the relevant state to be directed to its higher-ed website with grant and scholarship information. 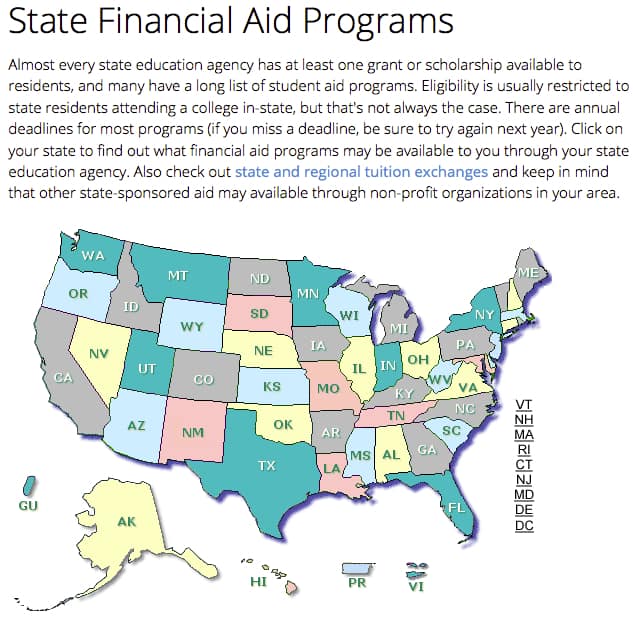 It’s critically important to understand what the deadlines are for applying for state aid in your state. To qualify for need-based aid, and in some cases merit aid, you will need to file the Free Application for Federal Student Aid.

Some states require the FAFSA to be filed as early as mid February or the beginning of March. If you miss your state’s deadline – and I’ve heard from distraught parents who did – it’s highly unlikely that you will get state assistance. Still other states only provide aid until the money runs out. If you need to, file the FAFSA with estimated tax figures.

One place to find the yearly state deadlines is by checking out the FAFSA on the Web Worksheet. Here is a screenshot of the state deadlines on the 2017-2018 worksheet, which is the latest one available. Some states did not submit their deadline information. 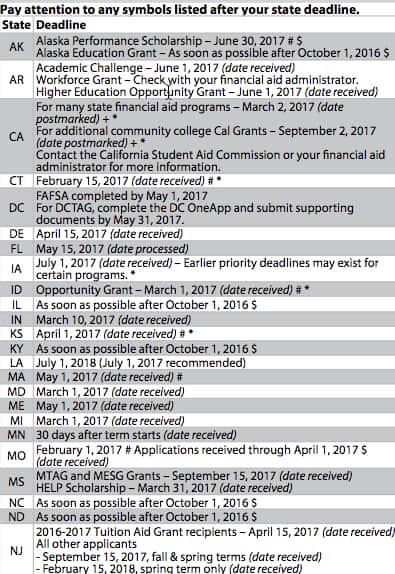 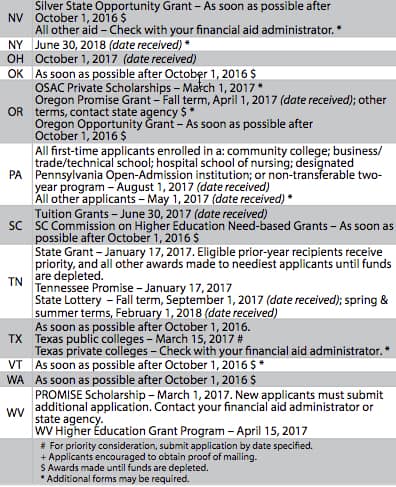 3. Understand if you qualify for need-based aid.

When students are looking at public universities outside their states, they must understand that it’s rare for students to qualify for need-based aid at a state university when they are nonresidents. States routinely reserve their need-based assistance to their own residents, which makes sense.

This reality is critically important for low and middle-income students who might assume they will getting state financial aid along with federal assistance. A student, who qualifies for federal aid, can receive it regardless of whether they attend a private or public university in or out of their state, but this isn’t the case with state aid.

Consequently, nonresidents need to know that the only money they will qualify for at a public university will almost always be exclusively merit scholarships. It’s important for students to get a good sense of what merit aid they might be entitled to (if any) before they apply to a state school as a nonresident.

You might be able to capture a discounted price or in-state tuition if your state maintains a reciprocal agreement with its neighbors. States commonly maintain reciprocal agreements with public colleges and universities in other states. Some of these compacts are large like the four you see below and involve many states in a region, while others are quite small.

Please check out the State College Aid lesson that I mentioned earlier for more on these compacts. Here are the four regional compacts:

Getting accepted into a school in a compact doesn’t automatically mean the student will get the reduced price. In the Western Undergraduate Exchange, for instance, schools can accept students based on their GPA and test scores. And you should make it clear when your child is applying that you want the reciprocity rate. There can also be earlier deadlines for WUE acceptances.

5. Check the requirements for merit scholarships.

In addition to need-based financial aid, state universities also routinely provide merit scholarships to their own residents, as well as out-of-state students. State universities are heavily dependent on the “numbers” when deciding who gets merit awards. And by numbers, I mean stats like grade point average, ACT or SAT scores and sometimes class rank.

Plenty of state universities must process tens of thousands of applications so they can’t look at students holistically in the admission process. Hence, the heavy reliance on academic performance statistics.

What kind of grade point average and test scores will generate merit scholarships will vary by school. At the University of New Mexico, for instance, a nonresident applicant with a 23 ACT or 1070 SAT and a 3.5 GPA can qualify for a yearly scholarship worth $15,337 and that’s not even the top award!

In contrast, nonresidents aiming for the biggest scholarship at the University of Colorado, Boulder, must be among the 1% to 3% of all outsiders academically who apply to the school. That’s obviously a much stiffer requirement!

It can be relatively easy to discover what scholarship(s) a student might qualify for since state schools are so number focus. Head to a university’s admissions website to learn what the opportunities are. You can also often locate what you need by Googling “scholarships,” and the name of the school.  There are often different scholarships for residents and nonresidents.

The prices that public universities charge for residents and nonresidents will vary significantly.

Choosing public universities outside your border can sometimes be a relative bargain. In other cases, the price you pay as a nonresident will be exorbitant and comparable to private universities that are stingy with financial aid and/or merit awards.

The prices for state universities have been increasing significantly since the recession of 2008-2009. State government support of public universities has never recovered, which has generated higher sticker prices for residents and nonresidents alike.

You can discover the identity of the state schools charging the highest tuition to its own residents by heading to the federal Center for College Affordability and Transparency. Schools on this hall of shame list include the University of Pittsburgh, Penn State campuses, University of New Hampshire, University of Vermont, College of William and Mary, Temple University, University of Illinois and some University of California campuses.

The tuition prices can be two to three times higher for nonresidents (this doesn’t take merit scholarship into consideration.) If you’re on a budget, you need to appreciate that the state schools that typically charge outsiders the most are those that enjoy coveted brand names or are institutions that are located in desirable areas such as near ski slopes or where it’s sunny year round. Here are some examples:

The schools that I just mentioned, as well as some others, can charge high prices because there are plenty of  rich parents here and overseas who will pay whatever price is necessary for their children to obtain bachelor’s degrees at a trophy school or schools offering a fun lifestyle.

Some of these schools, such as Arizona and Michigan, provide token merit scholarships (averages are  $7,129 and $5,742  respectively), but that won’t go far when you will be paying private school prices for state educations.

6. Look where others aren’t.

The shiniest public universities can charge obscene prices to nonresidents, but most state schools don’t enjoy that luxury. Consequently, the sticker prices will be lower at schools off the radar and the scholarships can be more generous and more plentiful. Please don’t get hung up by brand names. Schools, whether they are private or public, are not uniformly great, or uniformly good or uniformly mediocre. Where it matters is often at the department level. And that will require more digging on your part.

Here is an excellent New York Times essay written by Kevin Carey, an astute higher-ed observer about this reality:

The Fundamental Way That Universities Are an Illusion

Public universities with brand names are aggressively pursuing out-of-state students who can afford to come to their schools. This phenomenon is captured by an excellent 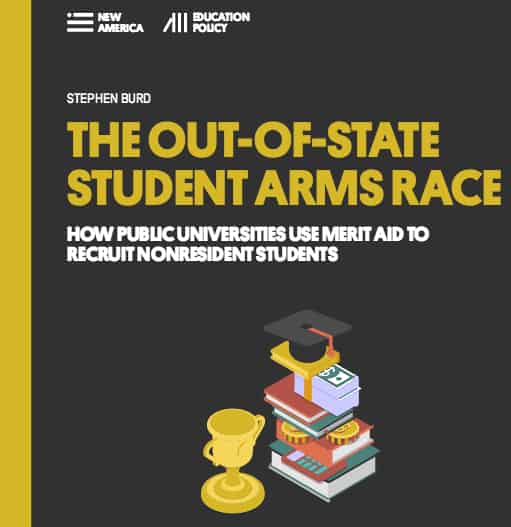 report from the New America Foundation.

I’d urge you to read the report if public universities beyond your border are on your child’s college lists. Here is the link:

In great detail, Stephen Burd, who is a tremendous higher-ed journalist,  documents that state universities are increasingly using merit scholarships to attract affluent outsiders. And this practice is increasing.

In the chart below, you can see in dramatic fashion that the amount of money state universities are devoting to the poorest and richest students are now nearly the same. 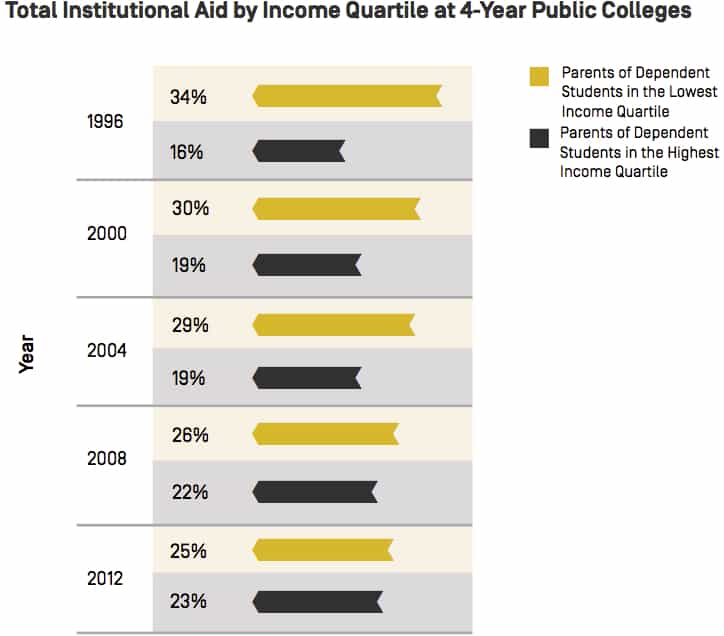 You will find lists in the New America report that share the percentage of students at state universities who receive merit scholarships. This is not just a phenomenon you’ll see at state flagships, but also at state regional schools.

In this list below, you’ll see the schools that provide the highest percentage of students with merit scholarships at flagships. 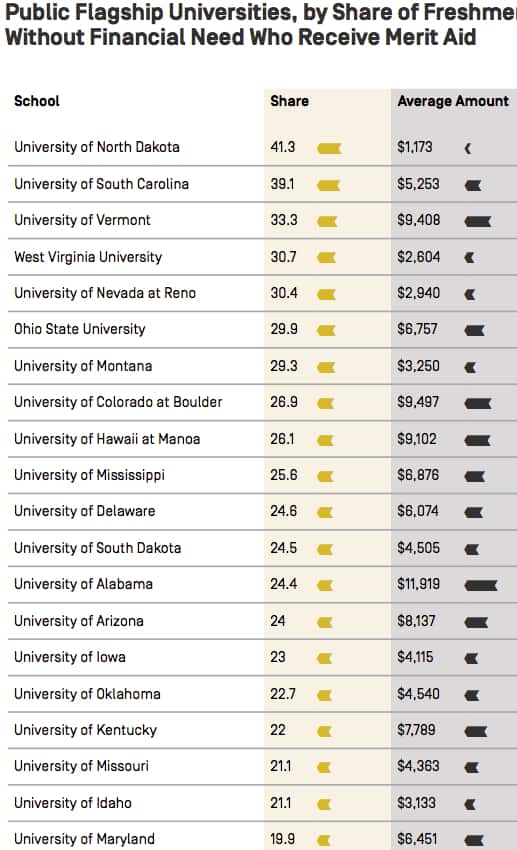 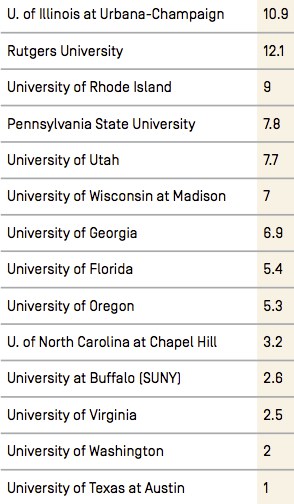 State universities are attracted to high-income students for a variety of reasons. Here are the main ones:

1 Wealthy students bring in more revenue. You can charge outsiders considerably more money and this cash is welcome since state governments are failing to  support their public universities as they did before the recession that started.

2. High-income students help with rankings. Just like their private peers, state universities are obsessed with inching up in the ratings and attracting smart, affluent students can help with that effort. As I mentioned earlier, state schools focus almost entirely on test scores, GPA and sometimes class rank in the admission process. These are among the admission factors that U.S. News cares about.

3. Schools feel the need to attract rich students to ward off poachers. If state universities don’t lock down their own brightest students with merit awards, they could find these teenagers swooped up by competing public universities elsewhere.

For example, in the report Burd noted how the University of Missouri in Columbia (my alma mater) felt it had to react after admission representatives from the Universities of Alabama, Arkansas, Kentucky, Mississippi and Minnesota began aggressively recruiting in the state.

After losing out on high-achieving students that would have normally enrolled at Mizzou, the school significantly boosted its merit aid to higher-income Missourians and nonresidents. It also began poaching Illinois residents who might have normally have attended the University of Illinois, Champaign-Urbana. Now 20% of students at Mizzou are Illinois residents. University of Iowa and Indiana University have also been aggressive in recruiting Illinois teenagers.

You can discover more about this phenomenon by reading a 2016 article in The Atlantic entitled, Outsiders Welcome.

The chase for high-income students, the report notes, is bad news for other students. State universities that dispense a lot of merit scholarships tend to serve a smaller percentage of disadvantaged students.

As the report notes, “In bringing in more and more wealthy nonresident students, these colleges are increasingly becoming bastions of privilege.”

An excellent way to lower the price of a state university for an outsider is to become a resident. That way you can pay the lower in-state tuition. Some states like California and Colorado make it almost impossible for undergrads to become a resident. In other states, such as Missouri and Utah, it’s relatively easy.

Here is a link to information about residency requirements in the 50 states that’s on FinAid.org.

Don’t let your child apply to any state or private school without first using a net price calculator that will give you personalized estimate of what that school would cost you. If you haven’t already, read the net price calculator lesson in the module entitled, Your Families’ First Steps.

When checking out-of-state universities as a nonresident you need to be careful that you are getting an accurate price.  If the calculator at a public university doesn’t ask about your state residency, the cost estimate will probably be wrong.