State aid represents nine percent of the college money awarded in this country. Almost every state education agency has at least one grant or scholarship program available to residents and many have a long list of state aid possibilities, which can create confusion for families.

While there are some exceptions, eligibility for these state programs is usually restricted to state residents attending 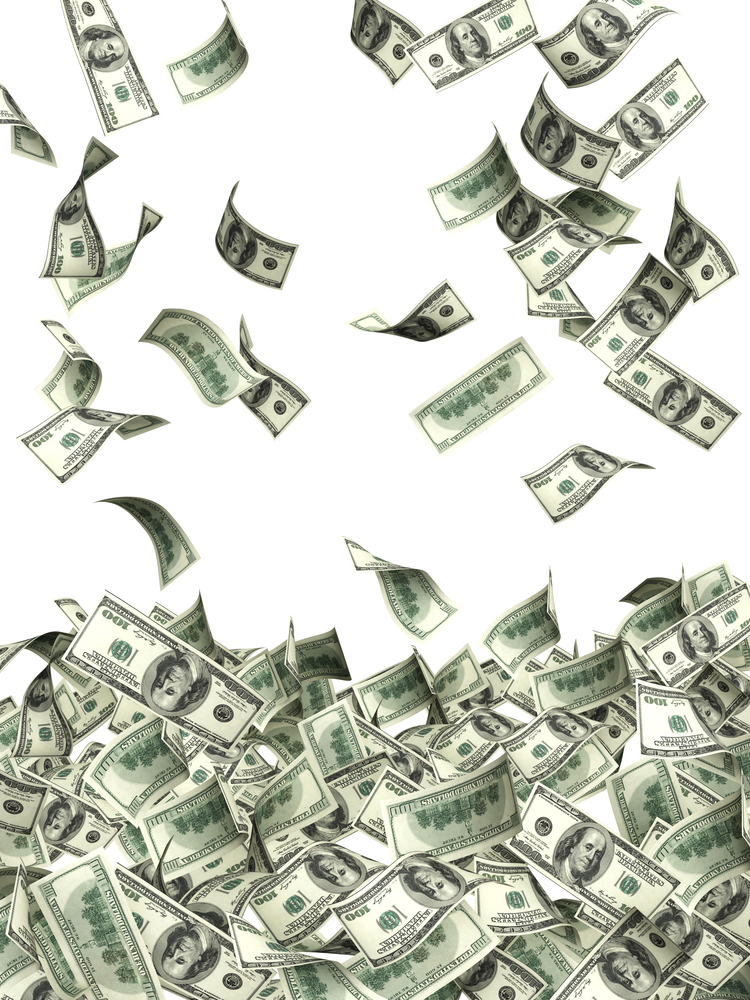 college within their states. Some state programs are centralized which means the awards are set by formulas on the state level. States that use this system include California, New York and South Carolina.

Other states have a decentralized program – the governments set basic eligibility criteria but they provide the funding to the schools that exercise some discretion when making awards. States in this category include Colorado, Texas and Virginia.

You can find links to the aid programs that are available in the 50 states by visiting the website of the National Association of Student Financial Aid Administrators.

An easy way to begin getting familiar with state aid practices is to look at a comprehensive report that the Brookings Institute released  called Beyond Need and Merit: Strengthening State Grant Programs. After examining the aid practices in the 50 states and the District of Columbia, the institute concluded that 73% of state grants went to students who required financial assistance.

Some states, however, are dispensing most or all of their aid based on such factors as grade point averages and standardized test scores. Most of the states that award the majority of their aid by merit are located in the South and these programs often benefit affluent students.

Here are the states, according to the report, that provide the smallest percentage of their government college grants based on financial need:

Of course, you can flip the above percentages to see which states devote the highest percentage of their awards to students who are often better off financially.  In Louisiana, for instance, 35% of students, who captured 45% of all the state grant money, had median household incomes of $80,000 compared with the statewide median income of $45,433.

Students who qualify for these state-based merit scholarships won’t necessarily hold onto them. According to the Brookings report, about two-thirds of merit scholarship recipients in Georgia and 40% in Kentucky lose their scholarships after the first year because they don’t maintain the necessary grade point averages.

Families with low and moderate-incomes are more likely to benefit if they live in states where all or the majority of state money is based on the financial need of the household. With the exception of Texas, the states that devote all or nearly all of their aid to those who have demonstrated financial need are above the Mason-Dixon line.

Here are the 22 states that allocate at least 95% of state aid to those who require financial assistance:

Look at this Brookings Institute map to get a bird’s eye view of which states devote most of their money to need-based aid (darkest blue) versus merit aid. 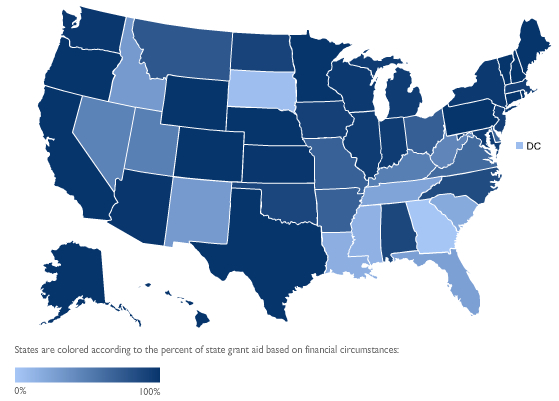 With this link, you’ll access the map and be able to see information on grant programs by clicking on any individual state. Here is the snapshot of California’s programs: 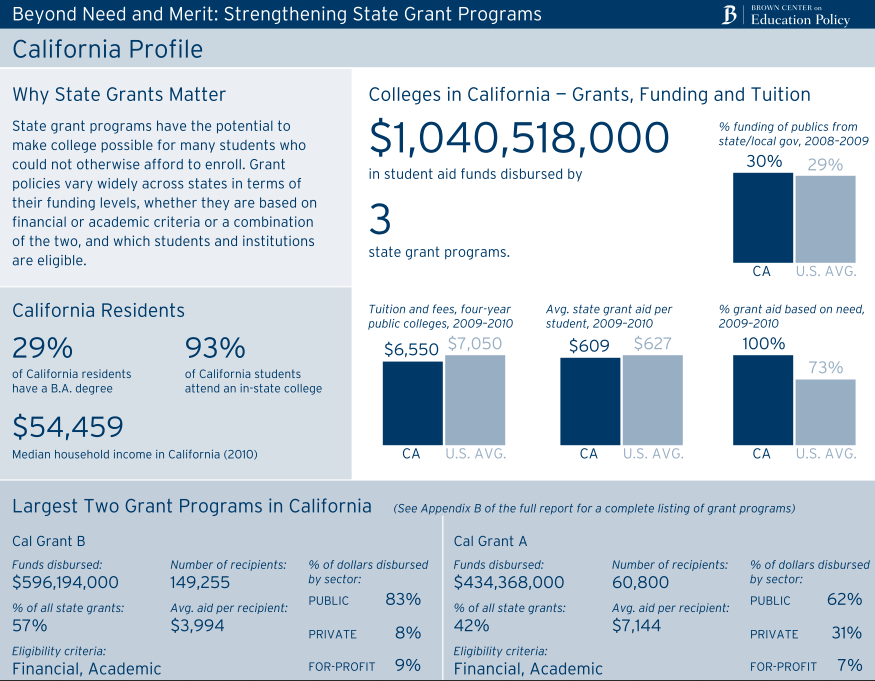 The percentage of state money that goes to students who need a helping hand doesn’t tell the full story.

For instance, Texas only funds a fraction of the students who are eligible for TEXAS Grants because of limited funds. Other states, such as Illinois, Kentucky, North Carolina and Oregon, also limit access to their money by dispensing money on a first-come, first-served basis. If you hope to receive merit or need-based state grants find out what the application requirements are and apply at the earliest possible date.

Minnesota, New York and Pennsylvania are rare examples of states with large need-based grant programs that fund all eligible students.

Here’s another reality: in some states that devote their funds to needy students, the average grant is very low. Alaska and New Hampshire fall into that category. New Hampshire and Michigan are in the worst possible category: high tuition/low financial aid states. In other words, the tuition at state universities in Michigan are higher than average, but the financial awards are lower than average.

Alaska, as well as Utah, is in the low tuition and low aid category. New Jersey and South Carolina fit into the high tuition and high aid category while West Virginia and Louisiana’s policies are characterized as low tuition/high (merit) aid.

What is painfully clear is that the states aren’t doing enough to support their higher-education systems, which is making the cost of college more expensive for all students heading off to state universities.

One way to cut costs is to look for reciprocal agreements that lower the price for eligible students interested in attending public universities beyond their state borders. 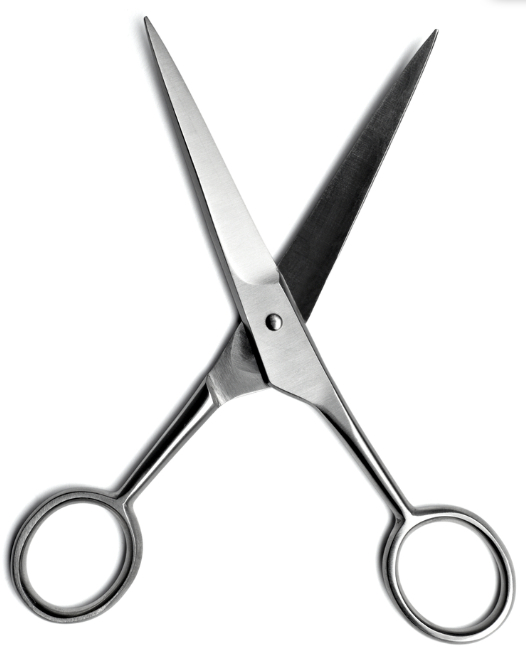 colleges and universities in other states. Some of these compacts are large and involve many states in a region, while others are quite small.

Some compacts can involve just a couple of states or counties within states.  Ohio, Kentucky and Indiana, for instance, maintain a reciprocal agreement with each other, as does Minnesota and North Dakota. The University of Minnesota maintains reciprocal agreements with North and South Dakota, Wisconsin and the Canadian province of Manitoba.

There are countless examples around the country of these piggyback arrangements. Schools won’t necessarily advertise these arrangements so you should ask.

Why would states cut the price for outsiders? Money is one motivator. If reciprocal agreements are in place, a state might not have to worry about offering its own students, for instance, a school of architecture, optometry or forestry. Instead of spending the money on these majors, a state can reach a deal with a neighboring state.

That’s exactly the sort of agreement that the states of Kansas and Missouri reached many years ago. My alma mater, the University of Missouri, has a dentistry school, but the University of Kansas doesn’t. KU, however, has a School of Architecture, but Mizzou doesn’t. Consequently, Missouri architecture students can pay in-state tuition at KU and dentistry students from Kansas enjoy a lower price at Mizzou.

Large groups of states have also entered into regional reciprocity agreements. Keep in mind that not all state universities are involved in these compacts. In the Western Undergraduate Exchange, which includes schools from 15 states, some premiere state research universities such as the University of California campuses, University of Washington (Seattle) and University of Colorado (Boulder) don’t participate. In addition, WUE schools won’t always offer the full range of majors to outsiders receiving a discount through the program.

Getting accepted into a school in the compact doesn’t automatically mean the student will get the reduced price. In the Western Undergraduate Exchange, for instance, schools can accept students based on their GPA and test scores. And you should make it clear when your child is applying that you want the reciprocity rate. There can also be earlier deadlines for WUE acceptances.

Here are major regional compacts across the country:

This program provides tuition discounts for more than 1,900 academic programs in Southern states.

The public institutions that participate in this compact will charge students no more than 150% of the in-state resident tuition for specific programs. Private institutions offer a 10% reduction on their tuition rates.

Participating state universities will provide nonresidents with a tuition rate that is no more than 150% greater than the in-state rate.

This program enables nonresidents to enroll in available graduate programs outside their home state at resident tuition rates.