Check the Return on Investment (ROI) for Colleges and Academic Majors 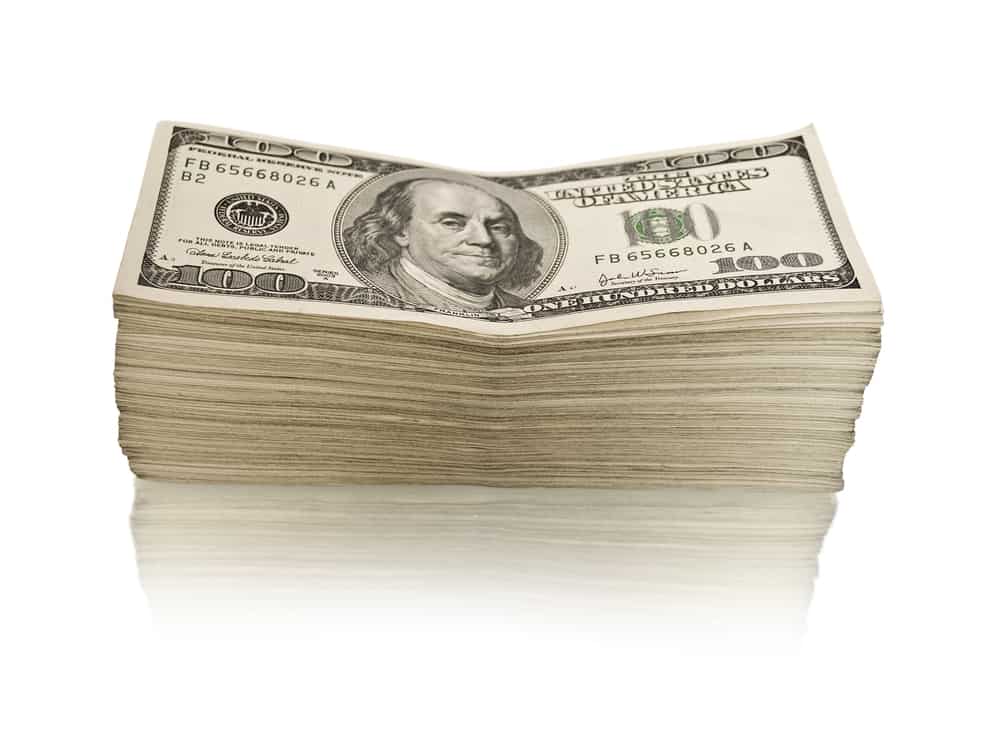 College degrees cost too much to ignore the return on investment (ROI) for colleges on your list, as well as the ROI for a particular academic college major.

Luckily, a handful of resources, which rely on federal data, can help you pinpoint the ROI for not only specific colleges, but also academic majors within particular schools.

Return on Investment (ROI) for Colleges and College Majors

Today, I’m going to share three college ROI resources that could be invaluable to your family:

Georgetown University’s Center on Education and the Workforce

Using the latest federal data, the Georgetown center ranked 4,500 two-year and four-year colleges and universities by return on investment.

The center defines net price value (NPV) as how much a sum of money in the future is valued today. This metric includes costs, future earnings and the length of time it would take to invest and earn a specific amount of money over a fixed horizon.

What is cool about this tool is you can use it to filter in a variety of ways including looking at two and four-year schools in a particular state, as well as state and/or private institutions nationally. You can also pick the time interval you want, the rank for that time period and filter by highest and lowest performing institutions in that time period.

As an example, here is a screenshot of a search I did for state universities nationally that provided the highest NPV for 40-years post-graduation.

The rankings also includes a metric that measures the share of students at an institution whose earnings 10 years after enrollment are higher than those of workers with a high school diploma as their highest level of education.

While Georgetown provides an institutional level view of ROI, it is also critical to explore what the economic return is for individual academic disciplines.

Foundation for Research on Equal Opportunity, which is a think tank that is referred to as FREOPP, calculated the estimated earnings and lifetime ROI for nearly 30,000 bachelor’s degree programs.

You can discover the financial value of individual degree programs within an institution. To make the calculations, the researchers looked at earnings at ages 25 and 45.

One thing you will discover when checking on academic programs are the huge earnings differences within an institution for individual majors. It’s important for families to understand that a highly ranked school will definitely not insure high earnings for students from all majors.

At Berkeley, for example, the lifetime ROI for business majors and chemical engineers is $1,529,287 and $1,069,675 respectively. Compare that to the ROI for anthropology and classical/ancient studies at Berkeley which are a negative $57,987 and negative $238,293 respectively.

Here’s an example from a private university:

I used this ROI tool when I was giving advice to a friend’s daughter earlier this year, who was considering majoring in theater arts at San Diego State. The parents of this young woman have few financial resources and so there will be little-to-no safety net when she gets out of college. She was shocked when I showed her the ROI for drama/theater arts majors at SDSU. It’s a negative $240,611!

That sobering realization prompted her to look at more practical majors considering her financial situation.

Using San Diego State as an example, here is a screen shot that illustrates how wildly different the ROI can be for different majors within an institution: 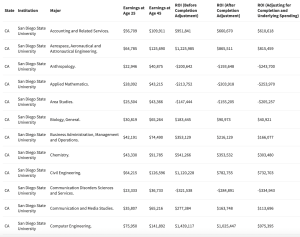 In a separate study, FREOPP.org has also calculated the ROI for 17,000 associate degrees and certificates.

In addition, FREOPP has calculated the ROI for 14,000 master’s, PhD and professional degrees. Too many individuals enroll in graduate programs for the wrong reasons, including not knowing what else to do, and they suffer financially because of it.

According to FREOPP,  the median master’s degree has a net ROI of $83,000. But some master’s degrees are worth over $1 million, while 40 percent (!!) have no net financial value at all.

Third Way, another think tank, takes a crack at department level earnings and earnings by type of higher-ed institution, such as liberal arts colleges, doctoral universities, master’s level universities and specialty schools. It does so by measuring what it calls the Price-to-Earnings Premium (PEP) calculated as the time it takes students to recoup their post-secondary educational costs based on the earnings premium that the typical student obtains by attending an institution of higher education.

The data from the U.S. Department of Education allowed the data crunchers to dig below the surface at institutions across the country to explore what kind of ROI the typical student received from his/her specific college program. Comparing the earnings premium that students obtained relative to the price they paid to earn their credential allowed Third Way to calculate the PEP that individual majors within individual institution produce for their graduates.

In two charts you might find interesting, you’ll see the highest percentage of graduates who recouped their educational costs within five years. You’ll also see the majors that did the worst.

The worst performing major was drama/theatre arts and stagecraft where 72.5% of graduates had yet to experience any return on their college investment after five years!

When money is an issue, and it almost always is, it is important for parents and students to look at the potential ROI of specific majors.

Families shouldn’t just look at the beginning salaries but instead take a longer look. For instance, the Georgetown data, in particular, shows, that students attending some liberal arts colleges that tend to have lower starting salaries do enjoy considerable salary boosts later in their careers.

What the new resources do show is that the academic major selection is often critically important for an individual’s future financial health. 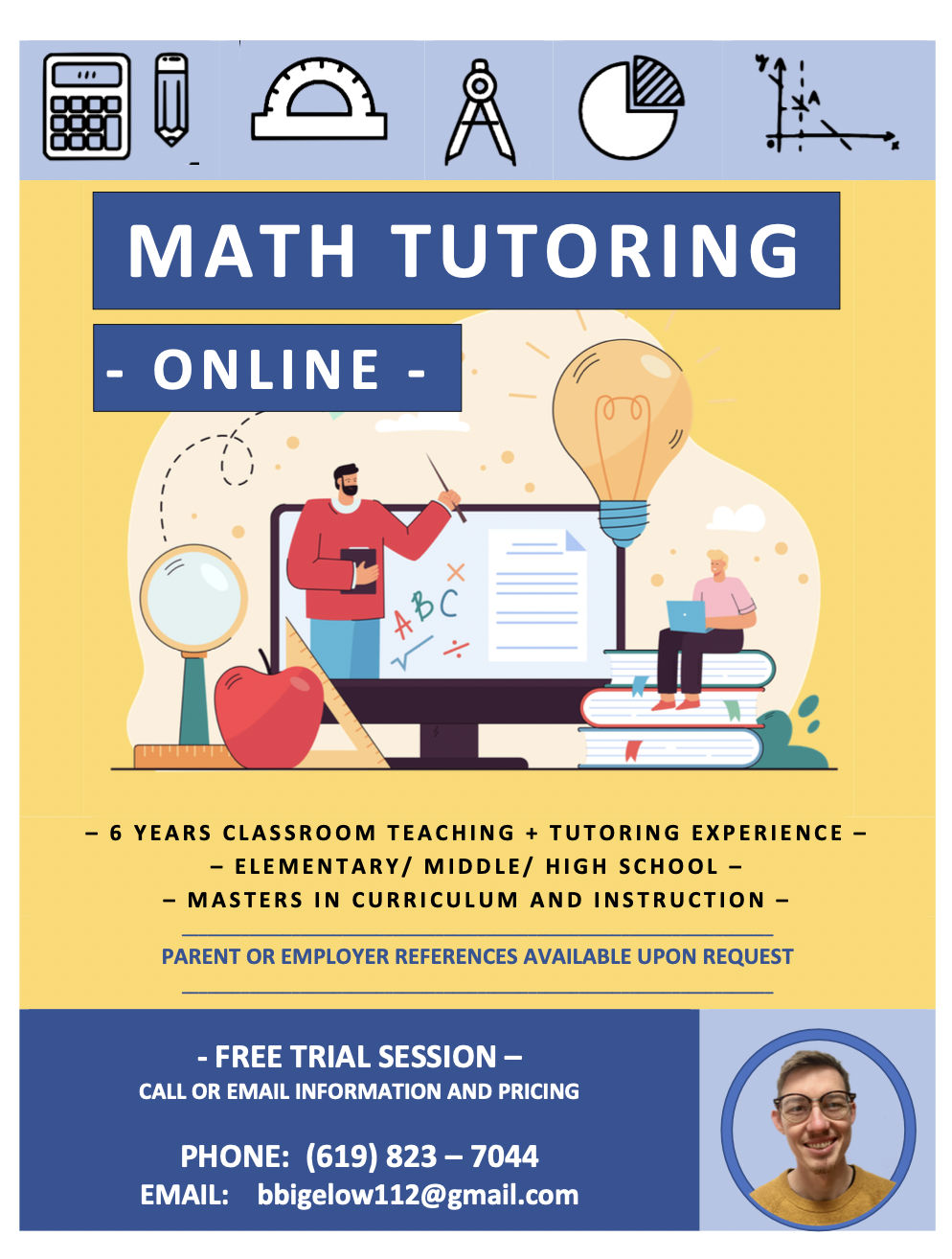 He’s not a marketer, but he’s a heck of a math tutor! I suggested that he offer one free session for parents who want to give him a try. And he thought that was a great idea.

So if your child could use some math knowledge delivered by a kind, understanding tutor, give Ben a try!