I am eager to get to know everyone who is taking this class!

One of the neatest parts of this class is that it has attracted people from across the country. Your classmates include parents from such states as California, New York, Michigan, Massachusetts, Texas, Hawaii, New Jersey, North Carolina, Georgia, Pennsylvania and Washington.

I also want to welcome the college consultants and high school counselors taking the class who are scattered across the country. 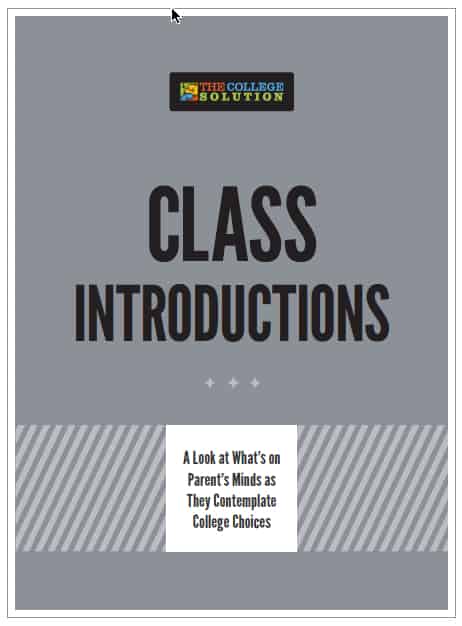 I’d love for you to introduce yourself by using the Leave a Reply box below.

If you scroll down to the bottom of this lesson, you will see in the comment section, many introductions from parents and professionals who have taken this course previously.

I suspect that you will relate to many of their concerns and aspirations, as well as be interested in my responses.

To make it easier for you to read through many of the comments of some previous members of  The College Cost Lab, I have combined them into a large PDF that is 149-pages long!!

To access the Class Introduction resource guide, click on the link below or on the screenshot of the cover page.

If you’d like to introduce yourself, here are some suggested questions to get you started:

1. Share where you are from, as well as something about your college-bound teenagers.

2. What do you hope to get out of this course?

3. If you are a professional, what are your biggest challenges as you help families with their college decisions?

Please introduce yourself in the Comments box below.