Is Graduate School Worth the Money?

Is it worth it to get a graduate degree?
A lot of young college grads are asking that question as they face lousy job prospects. Telling people that you work as a barista doesn’t seem nearly as satisfying as mentioning that you are heading off to graduate school. I wrote a post about the grad school decision earlier this month:

Should You Really Go to Grad School?

I’m  bringing up the issue today because The New York Times devoted its Education Life quarterly on Sunday to  graduate school issues and included an article that  examined whether graduate degrees are worth the cost.
I cringe when I think of all the students who are graduating with debt after earning bachelor’s degrees and then promptly doubling down by borrowing more money to attend graduate school.
Nonetheless a Georgetown University study that received a ton of press in the spring suggests that the median salary of a worker who possesses a master’s degrees is 25% greater than those with bachelor’s degrees. According to Anthony P. Carnevale, the study’s author, graduate school is better for those young enough (under 35) to reap the financial benefits of a graduate degree. There are many factors that come into play if you want to attend graduate school and I suspect most grad students never do enough research before taking the leap. That’s certainly true with law school.

As you can see from the New York Times’ chart below, grad schools provide a far greater boost in salary in some disciplines.
Journalism represents one of the least lucrative master’s degree programs. My husband got one of these puppies. Bruce didn’t earn his master’s degree at Columbia University’s journalism school because he expected to make more money in the field (good thing), but because he wanted to get the hell out of Fairbanks, AK, where he landed his first reporting job after earning an English literature degree at UC Berkeley. A master’s degree from Columbia didn’t appear to increase Bruce’s earnings over his career, but it did save him from minus-50 degree winter days and a TV station with filthy orange shag carpeting.

Who Gets an Earnings Bump 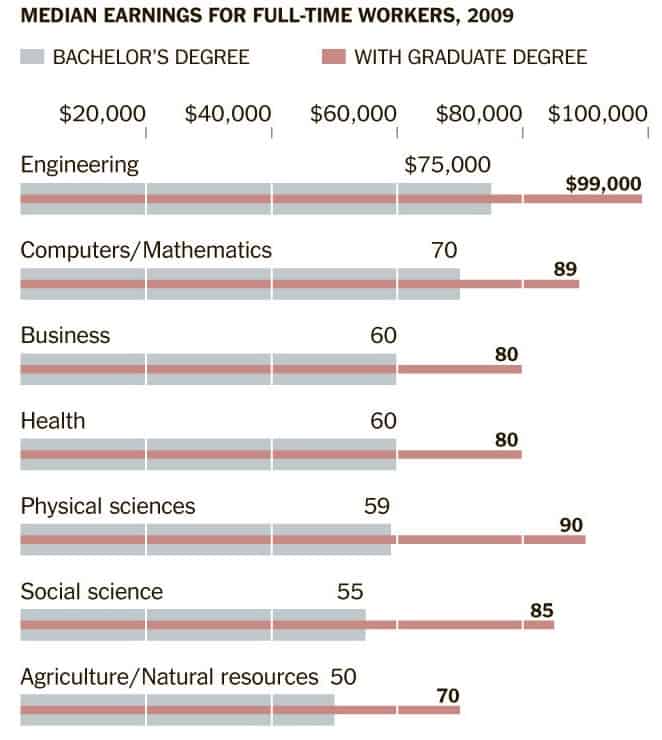 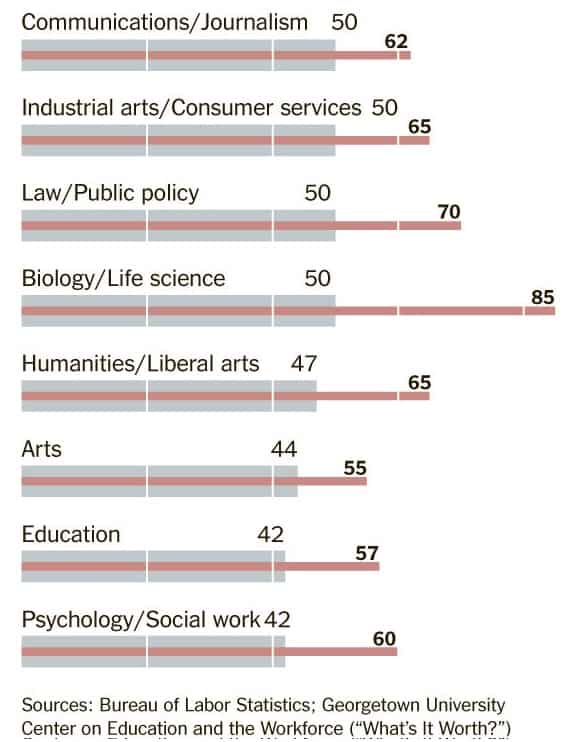 America’s Most Popular Graduate Degree
The Real Cost of Attending an Expensive East Coast University
Anatomy of a Stingy College and a Generous One
Financial Aid Chances with a 2.9 GPA

Lynn O’Shaughnessy is the author of The College Solution and she also writes a college blog for CBSMoneyWatch.com and US News.