How to Increase Your Admission Chances by 40% 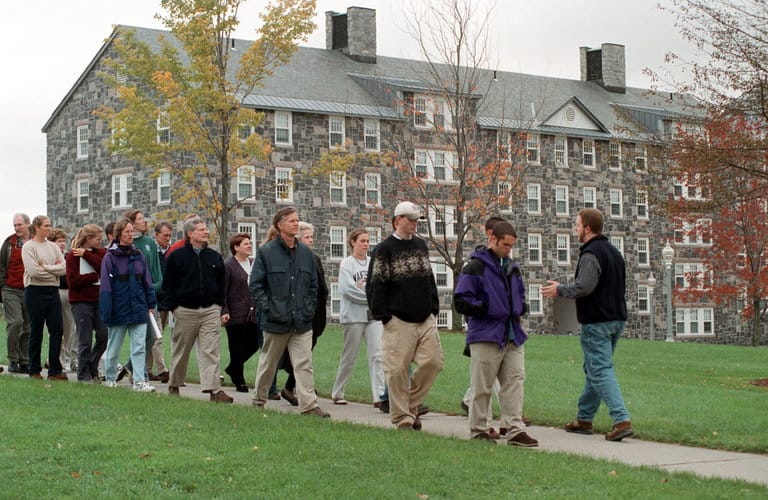 Should you visit a college before you apply?

According to a new study, for some students there is a powerful benefit to visiting highly selective schools.

According to the researchers, teenagers, who apply to highly selective colleges and visit the campuses, are up to 40% more likely to be admitted than comparable students.

The study suggests that the applicants who would benefit from a campus visit to a highly selective school are teenagers who are otherwise qualified for admittance.

Why colleges care that you care!

Highly selective colleges can be gun shy about accepting solid applicants if they haven’t demonstrated interest in their institutions. Schools fear that these students are just using them as safety-school back ups if the institutions they really covet reject them.

Thanks to the Common Application, it’s become more challenging to know which students genuinely consider a school an attractive option because it is so easy to apply to a large number of schools. With the Common App, which nearly 700 schools use, students can apply to many schools without much extra effort.

Increasingly students, who are aiming for the most selective schools, are treating their applications like lottery tickets. While this often doesn’t work, they believe that applying to many elite institutions will boost their chances of winning.

While there are many ways for students to show interest in a college, the study suggested that it’s the visit that matters the most for highly selective schools. This reality will favor affluent students.

When a visit doesn’t matter

Visiting a campus, however, isn’t going to boost admission chances at all elite schools.  The most elite universities such as Stanford and Harvard couldn’t care less if you show up on campus because they enjoy very high admission yields. In other words, these alpha dogs aren’t worrying that a lot of accepted students are going to snub them.

How to measure demonstrated interest

According to the National Association for College Admission Counseling, 50% of four-year colleges say they view demonstrated interest as having “considerable importance” or “moderate importance”  on admission decisions.

Luckily, there is no need to guess whether schools want applicants to show them some love.

An easy way to determine if a school uses demonstrated interest in its admission decisions is to head over to COLLEGEdata. Once there, you can check out how individual colleges rate 19 admission factors.

Each school is asked to rate the 19 admission factors in these four categories:

Schools rate all these admission factors in a document they complete called the Common Data Set. COLLEGEdata conveniently compiles much of this information on its website.

Using Stanford as an example, let’s take a look at the 19 admission factors.

As you can see in this screenshot, Stanford doesn’t consider the level of an applicant’s interest at all. So clearly you won’t gain an admission advantage by taking a tour. 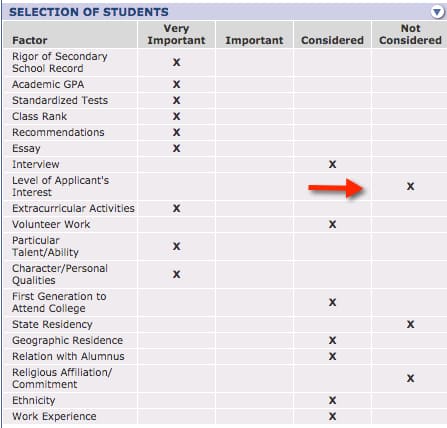 In contrast, the Naval Academy says it’s very important for a teenager to show interest in the school. 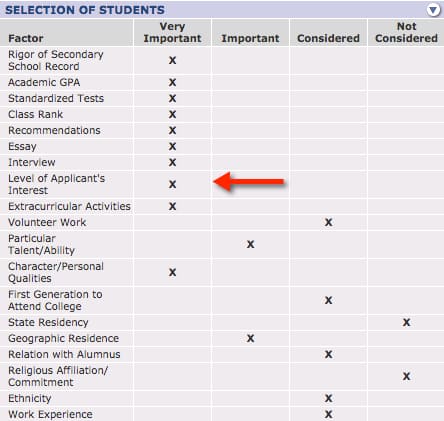 The most obvious reason to visit a school is to determine if you even like the place enough to spend time and money applying.

Visiting colleges, however, can be expensive.

Living in California, it wasn’t cheap visiting colleges with my son and daughter in places like Pennsylvania, Wisconsin, Oregon, Washington, Illinois and Maryland.

There are many ways to demonstrate interest. Here are some of them:

Focusing on applicants who have made the extra effort to contact a school allows an institution to gain better control of its admission process.

For many colleges, an unsolicited inquiry is the best type. From day one, a student who called, emailed or wrote a letter requesting information may receive more care and attention during the recruitment process.