Many financial aid letters are confusing.

Perhaps the staffers generating these letters have been conversing in financial-aid speak for so long that they have lost their ability to communicate in plain English.

Of course, the cynical explanation for unhelpful financial aid awards is that many schools don’t want families to know when an offer is pathetic. Obfuscation is an effective way to keep parents off balance.

What Should Be in Every Financial Aid Award Letter

I am sharing with you some financial aid letters that I received from Paula Bishop, a CPA in Bellevue, WA, who is a financial aid expert. Once you see actual award letters,  you will have a better shot at understanding what your aid letters mean.

The following award letter comes from Chapman University in Orange County, CA, which has become a very hot school. As the school has grown more popular, the financial aid awards have gotten worse.

Take a good look. Do you see anything missing from the award? Does this appear to be a good award letter? 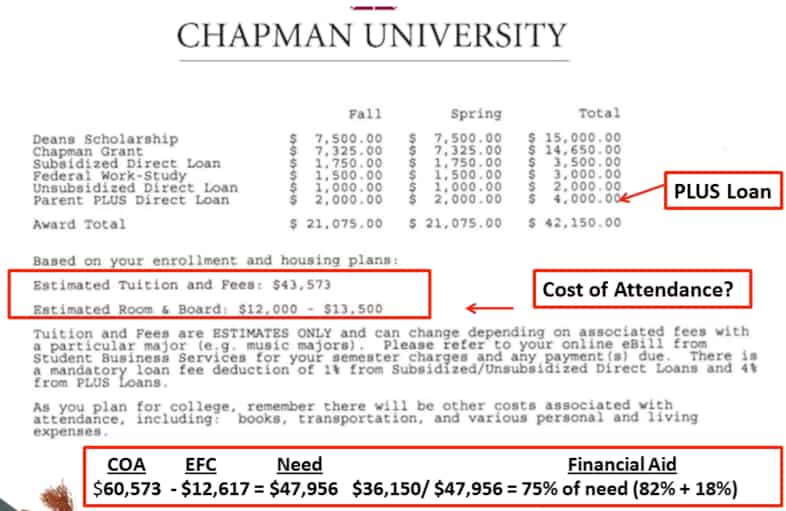 The letter doesn’t include Chapman’s full cost of attendance, which was a hefty $60,573. The letter provides the tuition/fees and estimated room/board of $12,000 to $13,500, but not books, travel and personal expenses. Some schools omit mentioning any costs including tuition!

The Chapman letter also doesn’t include what the family’s Expected Family Contribution is, which is a huge omission.  The EFC is what a family, at a minimum, will have to pay to attend a school.

You can’t determine if an award is good unless you know what your EFC is.  This family’s EFC is $12,617.  Ideally, the family would only have to pay $12,617 to attend any school. Realistically, however, most students will have to pay more than their EFC, but the closer to this figure the better. To attend Chapman, the family’s need was $47,956.

The Chapman award also included an item that schools should not be inserting in their packages, but typically do — the federal Unsubsidized Direct Loan.

Chapman also inserted the Direct Plus Loan in the package ($4,000). Schools often put this parent loan in the package, but this is misleading. The PLUS Loan is a federal variable-interest loan for parents that currently have a 6.31% interest rate. And parents must pay an additional 4.3% for any amount that is borrowed.

An Award Letter from Gonzaga University

Here is another example of a poor financial aid award that attempts to mask a stingy financial aid offer. This one comes courtesy of Gonzaga University in Spokane, WA:

How Good is This Award?

This is a poor financial aid award and yet at the top of the award letter Gonzaga brags that the award provides a total commitment of $62,360 over four years.  I assume the school is highlighting a four-year figure because it will appear more generous than the terrible one-year award this student actually received.

The four-year award wouldn’t look so good if the letter also noted that the four-year cost of the school will easily exceed $188,000.

A Close Look at the Gonzaga Award

Gonzaga was offering this child grants/scholarships worth $15,590  for the child’s freshman year. The school also inserted into the package the full federal Pell Grant for low-income students that was worth $5,550 (FYI, 2015-2016 maximum Pell Grant is $5,775) and a work-study job (the screen shot doesn’t show the job).

When you add up the three grants and the federal subsidized loan, it pencils out to just $24,640. (It’s okay for colleges to include a subsidized loan in a package because it is geared toward lower income students and has special features compared to the regular one.)

When you add up the institutional and federal grants, subsidized federal loan and work-study, Gonzaga only meets 52% of this family’s financial need.

Here is what the Gonzaga letter didn’t mention:

Expected Family Contribution. Since the letter doesn’t include what the family’s EFC is, the parents would have no idea whether the award is a good one or not. If you receive an award letter without the EFC, call the school and ask for it.

Cost of Attendance. This is another glaring omission. If you don’t know what the total cost of the school is, how is any family expected to know what their total outlay would be?

This is a textbook example of a student being gapped. In this case, there is a huge gap between the financial assistance that the child needed to attend Gonzaga and what the school is willing to provide.  I’d suggest it would be financial suicide for this student to attend this school.

An Award Letter from Fordham University

This award letter came from Fordham University and was sent to a prospective transfer student. Considering that one in three students transfer to another school, I thought it was it important to share this one.

The Fordham letter was stunning in what it failed to include. Can you figure out what’s missing? 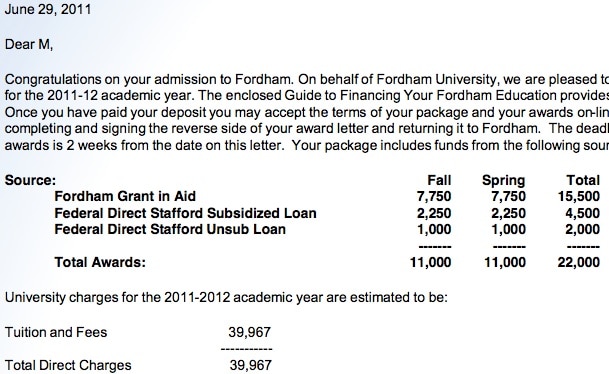 What Missing from the Fordham Award

Fordham failed to include room and board charges. Clearly an estimate of what it costs to live in New York was needed! Fordham lowballed this young woman, who ended up not attending this Catholic school.

An Award Letter from Columbia University

My last example comes from Columbia University. What do you think about this award letter? 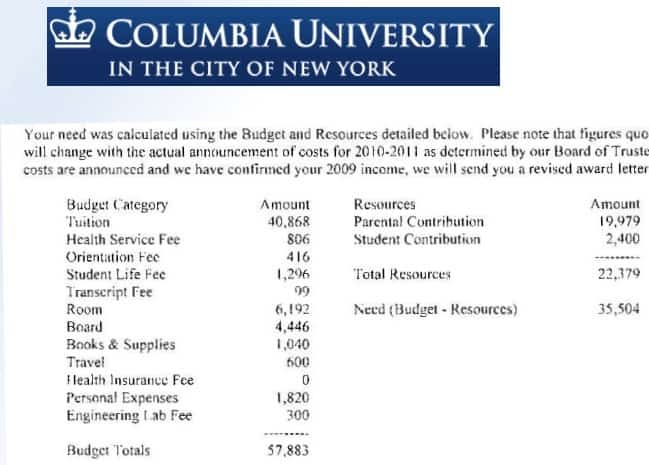 Columbia Gets an “A”

This is actually an award letter that gets it right. The award letter helpfully breaks down the cost of attendance. It also includes what the parental and student contribution will be based on the financial aid formula. Finally Columbia provides how it will address the family’s need.  Beyond the clarity, Columbia meets 100% of the family’s need, which only the wealthiest schools can pull off.

It’s important to be able to fully understand what a college is proposing when you receive a financial aid award letter. Unfortunately, you can’t count on many colleges and universities to provide a clear understanding of what they are offering in their aid awards. They are, after all, businesses.

If the document is confusing, call the school’s financial aid office and stay on the line until you understand. Too much is at stake to just guess.