Should colleges be evaluated more like baseball players?
I’m raising this question today because the St. Louis Cardinals are going to the World Series!
I had the good fortune of growing up in the 1960s in St. Louis when the Cardinals made it to the World Series three times. Among my fondest childhood memories was being able to watch the World Series in grade school in ’64, ’67 and ’68. Our teachers made us remain in our desks, but we got to push them as close to the black-and-white TV as we could. It was thrilling.

If you’ve read Moneyball by Michael Lewis, one of my favorite writers, or the movie version starring Brad Pitt, you might understand where I’m going with the question about colleges and baseball.
Moneyball tells the story of the Oakland Athletics, one of the poorest baseball teams, which has to compete against mega-rich teams like the Yankees and the Red Sox. Billy Beane, the A’s general manager, decided that the  way to succeed was to discount the conventional wisdom about what makes baseball players worth the investment. Let the Yankees spend the big bucks, the A’s would use a highly unorthodox way to find inexpensive gems who were undervalued by everybody else.
The A’s adopted a method first created by Bill James, a baseball genius and statistician. James, who once was a security guard at a baked beans factory in Lawrence, KS, developed sabermetrics that uses statistical analysis to evaluate baseball players that can be more effective than the traditional ways of picking talent.
Beane hired a young Yale economics whiz to start running the numbers and they immediately began clashing with the team’s old-fashioned scouts, who had their own hidebound ways to picking talent.  In the movie, one A’s scout even suggested that a player lacked confidence because he had an ugly girlfriend.
The team that Beane assembled managed to win 20 games in a row, which remains a American League record and they ended up in the playoffs. Today baseball teams routinely use sabermetric methods to evaluate players.

Okay, so what does this have to do with baseball?
Ryan Craig, a partner in University Ventures Fund, argues that colleges should start using a higher-ed equivalent of sabermetrics to determine if colleges are doing their job. Craig wrote an essay in Inside Higher Ed, that argues that colleges are measuring the wrong things when they attempt to determine how (un)successful they are. Here is a portion of what he wrote: 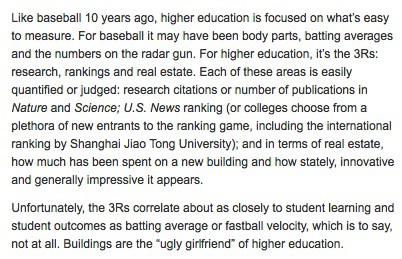 I think it’s only a matter of time before there will be a demand from the government, foundations, consumer advocates and elsewhere for meaningful statistics that will help families evaluate whether a particular college or university is worth the investment. With the right data, the higher-ed version of Billy Beane will be able to determine the on-base percentage equivalent for higher education. And frankly the day that schools can no longer hide behind their rankings, fancy buildings and research reputation can’t come soon enough!

More from The College Solution

4 Ways to Cut the Cost of an Out-of-State University
What is Your Expected Family Contribution?
Where Most Students End Up Attending College
Lynn O’Shaughnessy is the author of The College Solution and she also writes a college blog for CBSMoneyWatch.com and US News & World Report. Follow her on Twitter.