A Lousy Admission Offer From Cornell 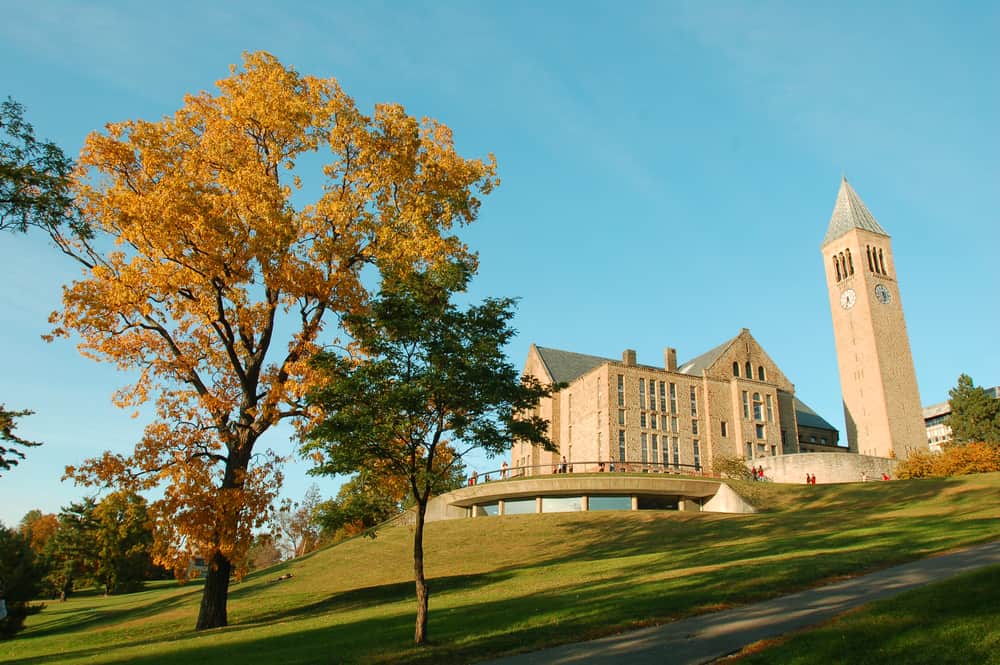 Every Friday I answer questions over at The College Solution’s Facebook page.

Posting questions on Friday via my Facebook page is  the best way to get my attention. Lots of people email me, but I just can’t answer all the queries, which makes me feel guilty. My husband calls it the Catholic-school-girl guilt that I have never been able to shake.

The reason why I’m bringing up my Facebook page today is because last Friday I turned the tables on my Facebook friends and asked them for their help because I was stumped by a mother’s dilemma. Cornell University had rejected her daughter for the 2013-2015 school year, but the university had made a counter proposal.

Weighing an Offer From Cornell

Here is the note from the mom:

What are your thoughts on these creative admission offers college are extending to students in lieu of a traditional acceptance/enrollment? 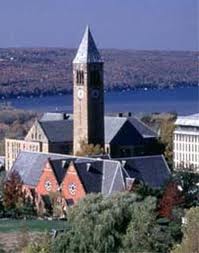 Cornell was/is her 1st choice.  So, at first she was sad because “she didn’t get in”, then she was happy because she thought “Hey, this is better than the wait list and YES I’m going to graduate from Cornell.”  My concern is that she is now looking for a school where she can most easily achieve the freshman GPA requirement to get into Cornell instead of choosing from other very nice schools where she was accepted (like College of Wooster).

I have your 1st and 2nd editions of The College Solution and while I got VERY useful information from them, you didn’t cover this! 🙂 What are your thoughts?  Do you know of anyone that has done this transfer deal?  Is this a good thing?  Or do you think my daughter should just let go?

What’s College Rankings Have to Do With This?

I am aware of schools offering students a freshman slot beginning in the January term, but I had never heard of a school asking an applicant to start somewhere else!

One reason why schools ask students to delay college for one semester is for space considerations if there isn’t enough dorm spaces. Students studying abroad, dropping out or transferring can open up slots.

There is, however, a cynical and I believe troubling reason why students are being offered a chance to start in the second semester or later.

Students who receive these offers typically have earned lower test scores and grades than those who start college in the fall. Schools make these students wait because U.S. News & World Report doesn’t use the test scores and grade point averages of January freshmen to calculate its college rankings. Schools believe that if they make students wait, they won’t take a hit (imaginary or not) from the college rankings giant.

I have a friend whose daughter got caught in this trap a few years ago when she applied to Whitman College (WA). She was an excellent student, but she attended a private high school in California where the grading was brutal. With her GPA not as good as many of the its accepted students, Whitman offered her a January slot. Since the girl really wanted to go to Whitman, she took the offer despite the snub.

I asked my Facebook friends to comment on schools asking students to wait an ENTIRE YEAR before starting at their school.

Apparently it is a small, but growing trend. In fact the practice even has a name — deferred admission or guaranteed transfer option. Colleges are motivated by the same reasons as institutions that only require students to delay attending college by one semester — influencing college rankings and filling the class ranks when attrition occurs.

I was particularly grateful for Bob Gilvey, a director of a test prep firm in New Jersey, who shared with me a New York Times’ piece on this shameful behavior.

Here is an excerpt from the 2011 post: Admission to College With a Catch, a Year’s Wait: 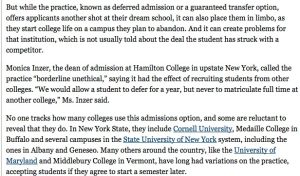 Anybody else consider this practice nauseating?

Cornell and every other school making students start somewhere else are hurting the teenagers and the institutions where they initially atten. Students aren’t likely to become a part of a college community because they aren’t staying. That’s not fair. Neither is it fair to the institutions that are clueless about the future plans of some of their freshmen.

If you visit my Facebook page, you will see all of the comments about this practice. In the meantime, what you do think?