A Cautionary Tale: Looking for Money

When money is an issue, students need to be strategic about where they apply to college.

I am sharing a story of a young man from Los Angeles that illustrates why the common practice of applying to a bunch of schools without considering whether aid is a realistic option is a dangerous strategy.

The teenager, who wants to major in journalism, was super excited when he got into his dream school – Syracuse University in upstate New York. (See photo above.) His parents, on the other hand, were stressing.

The affluent family’s expected family contribution was roughly $30,000. The EFC is what a family would be expected to pay, at a minimum, for one year at Syracuse or any other school.

Since tuition and room/board at this research university costs more than $54,000 and books, travel, and incidentals will boost that price, that would leave room for Syracuse to give this student some need-based financial aid or more likely a merit award. But the teen got nothing. When I heard this, I asked about the teen’s academic profile and the mom said he had about a 3.4 GPA.

I’d suggest that the student’s academic profile could at least partially explain why he was stiffed. Most schools give their best awards to the students who will help them move up in the US News & World Report rankings. At this school, a student with a 3.4 GPA isn’t going to do that.

When I checked the average grade point averages of Syracuse’s incoming freshman at the College Board, it showed that 65% of the students had GPAs of 3.5 or higher. A 3.4 GPA isn’t special at this particular school. 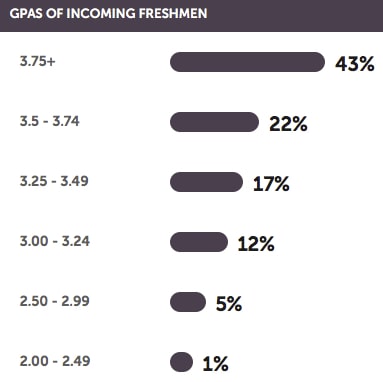 I then checked with the federal College Navigator, which is a handy site to look at a variety of statistics on individual schools that the U.S. Department of Education maintains.

Looking at Syracuse’s statistics on College Navigator, I saw that 67% of students at Syracuse receive institutional grants from the school. Consequently, it’s not surprising that a child that was close to the bottom third of the class would receive nothing even though he was eligible for need-based aid. 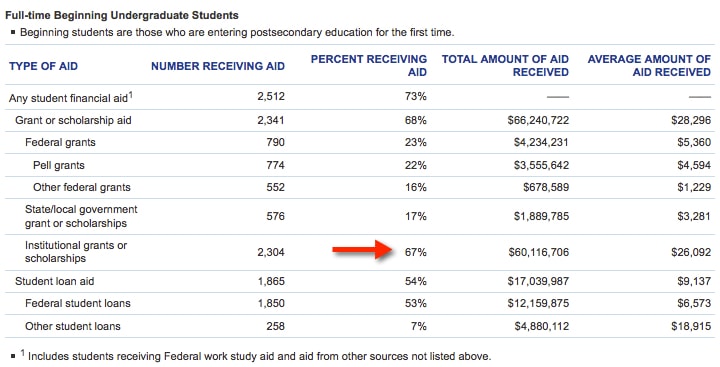 Schools That Have to Try Hard

The vast majority of private institutions award a much greater percentage of their students with institutional grants and scholarships than Syracuse. This is a topic that I discuss more in the next lesson and in the resource guide, The Ultimate College List Builder.

There are plenty of institutions where every student or nearly everyone receives something. Here is just a tiny sampling of the hundreds of schools that offer at least 95% of their students awards:

A critical factor in whether a school will award most or all of its students grants is how hard it has to work to attract their freshman class.

Schools that aren’t recognizable to the average college-bound teenagers and their parents will have to offer more applicants awards and often have to offer better merit scholarships.  Most master’s-level universities, which U.S. News classifies as regional universities, and private colleges fall into that must-try-harder category.

Schools That Don’t Have to Try As Hard

In contrast, research-intensive universities are the least likely to offer price cuts to a majority of their students. These universities, which support many doctoral programs, actually represent a surprisingly small category of schools that include state public flagships and private institutions of which the Ivies are the most prominent.

This small cadre of schools benefit from simple supply and demand. The demand for many of these brand-name schools far outstrip their supply so the institutions can make students, who do not qualify for need-based financial aid, pay full price.

Prestigious research universities can also limit their institutional awards because of their rankings, their locations, or their sports teams. Here’s a rule of thumb: if most people would recognize the name of a private university on a sweatshirt, it’s more likely to give out puny merit awards or none at all. While few parents and students know much about the academic offerings at Syracuse University, they probably are aware that the school has a very competitive basketball team that is often a March Madness player.

To illustrate what I’m talking about, here are some of the well-known universities that occupy some of the top 50 spots in U.S. News’ beauty contest that are located in largely desirable areas where awards tend to be even rarer. When looking at this list, keep in mind that at the typical private institution only 13% of students pay full price. The percentages in the following list show how many students pay full price at each school:

Affluent families who won’t qualify for financial aid will usually encounter the most difficulty cutting the price of college at research universities with high rankings. And Ivy League schools don’t provide any merit scholarships.

If the teenager from Los Angeles had widened his net and looked for schools beyond highly ranked research universities like Syracuse he would have cut his college costs. For instance, he could have applied to another school in upstate New York – Ithaca College – that offers its own well-respected journalism program.

Ithaca gives institutional grants to 92% of students. U.S. News puts Ithaca College in its regional university category, which does not get much media attention.

The teenager from Los Angeles also didn’t capture money at any of the other schools that he applied to, which were state institutions.

This student didn’t qualify for aid because the family didn’t target schools where he had a realistic chance of getting any.

The other schools on the teenager’s list were out-of-state public universities including Indiana University and the University of Oregon.

Many state flagships will give highly talented out-of-state students scholarships with top GPA’s and standardized test scores, but the most elite of these state institutions are primarily focused on charging very high tuition to nonresidents to bring in needed dollars.

The teen’s GPA and presumably his SAT scores weren’t high enough to receive a price break from these two popular state universities, which like other state institutions, primarily evaluate students based on their academic stats. Among state institutions, the most rigorous competition for money is going to be at the flagships, which represent each state’s premier public research university.

You will learn more about awards given by state schools by reading the lessons entitled, Advice for the B Student and State Universities and Merit Aid.

It’s not easy to be shut out of award money by every school on a teen’s list, but it does happen. Ironically, most private schools would have given this teenager a price break. The mom told me that she and her husband had enough saved to pay for one year of Syracuse. They aren’t sure what to do after that.